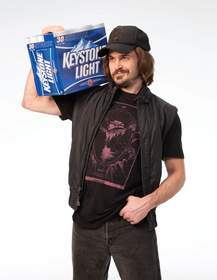 This guy is all for a pipeline. (He’s also a trademark of MillerCoors.)

Although President Obama just nixed TransCanada’s proposed Keystone XL pipeline, tar sands oil will in all likelihood continue to dribble from Canada to China and elsewhere, regardless of whether a pipeline links Alberta to the Gulf.

At least that’s the conventional wisdom many folks in the US manufacturing sector point to, when discussing the pros and cons of Keystone XL.

Keystone XL Pipeline and Construction Industry in the US

MetalMiner’s Jeff Yoders took readers through the implications of this glorified “construction stimulus” project in his analysis back in November 2014 – the last time Keystone was shot down:

The final environmental impact statement said 42,000 jobs would be created by Keystone XL in construction and support jobs in the states of Montana, South Dakota and Nebraska.

We have covered the rail car shortage in those states over the past few weeks and one of the side benefits of building the pipeline would be a reduction in strain on class 1 railroads, but the construction piece of the pipeline has been the focus of the argument since its initial permit application was applied for in 2008. The Associated General Contractors of America (AGC) points out that nearly 10,000 miles of pipeline have been built in the US since the application was filed with little to no argument. The AGC is a big supporter of Keystone XL.

Those 42,000 construction jobs certainly look enticing to the skilled laborers in those states still looking for work, yet, pipelines are anything but permanent solutions to unemployment. That same State Dept. environmental review found that the Keystone XL will create only 35 permanent jobs. (35, that’s it.) So, for such a limited impact is, essentially, a construction stimulus project really worth all of this debate?

If the environmental objections to the process of pumping large amounts of water and natural gas into tar sands to pump steam into the tar to extract oil are to be believed, then yes.

Read the rest of the article here: Keystone XL Senate Failure About More Than Construction

Our Executive Editor Lisa Reisman interviewed Andrew Browning of Consumer Energy Alliance back in 2011, and he took us through why an “all-of-the-above” energy policy makes sense – including the construction of Keystone XL.

We look at the role of the massive Keystone pipeline from central Canada — our largest trading partner — down to the Gulf of Mexico as a transport conduit for Canadian crude. While a good portion of the pipeline already exists, there are significant phases still under regulatory review.

As much as folks talk about severing ties to crude oil entirely as an energy source, the sad truth is that we’re nowhere near making that a reality just yet. Simply to sustain the country while new energies are worked out and tested, oil has a firm place in the mix of energy sources that the US has to work with. Not only that, the production of the pipeline itself, Browning mentions, will help create jobs in steel and manufacturing. Bottom line, Browning says, “The Canadians are going to produce this.” It’ll go east or west if not south; it’ll end up in China if not the US.