LME Copper is Caught in a Bull-Bear Battle Royal

Something is certainly amiss in the copper market.

For a market that is supposedly in surplus, the World Bureau of Metal Statistics estimates a 105-kiloton surplus for 2014. The forward prices are in sharp contango as this graph from the London Metal Exchange shows. 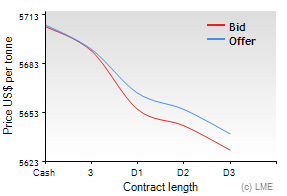 These apparent contradictions are symptoms of the tensions going on in the copper market, tensions that are further revealed in the open-forward copper contracts on the LME where a battle royal is raging between the bulls and the bears.

Reuters reports that the number of open forward copper contracts on the LME surged to record levels ahead of the Chinese Lunar New Year, with most investors betting that dwindling supplies will push prices up, despite the prospect of slower demand from China. Usually positions and activity would fall in what is typically a quiet time on the market with the Chinese away, but this year open interest topped out at 343,676 contracts on Feb. 13, equivalent to 8.6 million metric tons, although that has scaled back to around 335,000 lots as positions were closed before the start of the lunar holidays in China. Reuters says.

Bulls outnumber bears by almost two-to-one in March and April forward-copper contracts, according to a Reuters analysis of LME long- and short-positioning and open interest reports.

Underlining the uncertainty of what this means, a New York hedge fund is quoted by Reuters as saying “On a micro basis, I think copper is actually about to shift into a refined deficit for 2015 … But unfortunately that doesn’t matter in the short run when the macro is deteriorating and exchange stocks are rising.”

The shorts and longs can in part be split into Chinese investors aggressively shorting the market and large western position players going long. Consumers will no doubt be watching and hoping the Chinese prevail, prices have fallen steadily for the last six months but have rallied in recent weeks as exchange position taking has bullied market up. It remains to be seen if the Chinese investors return after the holidays with the same bearish intent.