Unusually among all metals, palladium’s supply/demand picture is reasonably straightforward, according to HSBC in their recent Quarterly Metals & Mining Review.

Free Download: How to Cut Export Costs in Int’l Trades

It’s true that prices have softened in the second half of last year as the expected shortages following strikes in South Africa failed to materialize, but substantial inventory held in Europe ahead of those strikes was significantly depleted (exact levels are very difficult to discern outside of the trade as stocks are held in producers’ hands).

The bank is expecting global palladium supply to fall 6% year-on-year in 2014 to 6.2 million ounces, reflecting those strikes and a lack of Russian government stock sales.

Going forward, Russian supply is an unknown with a falling oil price and the threat of further sanctions possibly encouraging exports to generate foreign exchange earnings.

That possibility notwithstanding, though, global production is expected to increase by just 0.4% on a compounded annual growth rate between 2014 and 2018 which will be helped by an improvement in the palladium content of Southern African ore as production from the Northern Limb and Zimbabwe grows.

On the demand side, the auto sector continues to dominate, the bank says, and despite the aggressive growth in scrap metal supplied by the auto and electronics industries, supply shortages seem inevitable. The bank is predicting a CAGR of 2.4% in palladium demand over the same 2013 to 2018 period. 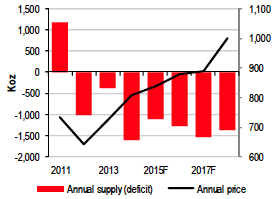 The bank forecasts demand from the auto sector to increase at a compound rate of 3.7% during 2013 to 2018, as light vehicle volume grows at 3% led by China at 7%. In addition, tightening emission standards will further raise the demand picture.

On balance, the bank is predicting continued deficits for palladium through the period in question with rising prices as a result. The estimate for 2015 is $837/ounce rising to $900/ounce for 2016-17.