The London Metal Exchange hosted a forum at Chicago’s Virgin Hotel last week and paramount on the minds of attendees was the Exchange’s recent clarification of “load-out” at warehouses, particularly those with long LME aluminum queues. The rules were changed  to prevent the abuse of LME load-in, load-out (LILO) requirements.

The Effect of New LILO Rules

The new definition of “load-out,” which went into effect February 1, states that metal must be shipped to a different warehouse operator or to a consumer in the same LME location, or it must physically leave the location altogether. This is to stop the so-called “merry-go-round” deals pioneered by Metro International in Detroit and that have taken hold at the Pacorini Vlissingen (Flushing) warehouse complex in Vlissingen, Netherlands.

However, certain respondents in the LME’s consultation process indicated that participants would like to be able to temporarily use non-LME, or off-warrant, storage situated in the same warehouse complex, before the metal is loaded out per the revised definition. 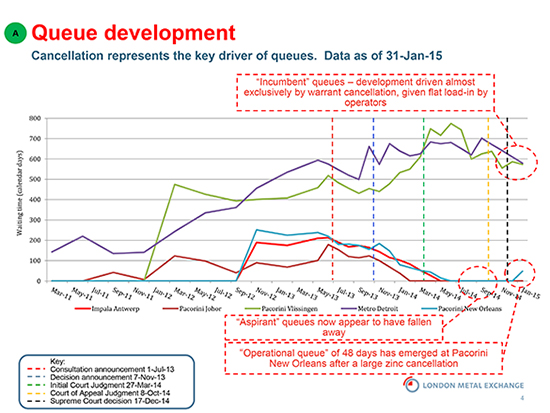 After the consultation announcement in July 2013, the London Metal Exchange contends that aspirant queues at warehouses fell off and incumbent queues, at Detroit and Vlissingen, were driven by warrant cancellation given flat load-in rates. Source: London Metal Exchange.

The LME has agreed to ask the physical market committee it created to address such questions to consider whether such a service could be allowed, while not diluting the protection against potentially abusive behavior provided by the new definition.

Matthew Chamberlain, head of business development at the LME, said further planned reforms such as capping or banning rents for metal held up in queues, are moving forward in the LME’s consultation process and the overall reform package is partially aimed at enabling the warehouse network to cope with a sudden, unprecedented, “worst-case scenario” increase in metal demand to get warehouse stock out if a sudden event. He also asserted that the reforms are working.

He also said that the warehouse queues have been going down as a result of the LME’s pursuit of warehouse reform.

“Really the effect on the market, was felt right when we first we announced our intention to take action (pursue linked load-in, load-out rules) on July 1, 2013 you could see that the net load-out at the (smaller queues) fell away and the larger queues were stabilized and are now falling,” Chamberlain said. “We fully understand that this is still too long a waiting period for our users and we fully sympathize with the view that these queues are still too long and we are taking action to accelerate that.”

The actual changing of the LILO rules on February 1 had little effect, Chamberlain said, because many warehouses had already augmented their behavior during the process of the LME’s litigation over the LILO rules with primary aluminum producer UC Rusal.

The LME recently published a discussion paper regarding its proposed structural solutions to warehouse queues, including an analysis of possible competition law concerns. The two most relevant proposals are the aforementioned queue-based rent capping and charge capping (maximum levels warehouse operators can charge renters for metal held in queues). If these new rules are challenged in court as the new LILO  rules are, Chamberlain said that the LME will vigorously pursue its rights to regulate the warehouse network as it did during the UC Rusal challenge.

“Does the benefit arising from these approaches, that we know many people feel is quite significant, does that outweigh the market uncertainty of attracting a legal case brought by a market participant,” Chamberlain asked. “That’s the discussion we will be having with the market over the next couple of months.”