“This (reform of the LME warehouse system) is really about recommitting to the quality of LME pricing, a goal that’s always going to receive our top attention because the smooth operation of that physical delivery network really underpins everything we do for both the financial and the physical players in the market.” – Matthew Chamberlain, Head of business development, London Metal Exchange

LME Aluminum for three-month delivery has fallen back below the $1,800-per metric ton level from over $2,100 in the third quarter of last year. The prospect of a disorderly unwinding of the stock and financing trade, which, until recently, had locked up large amounts of aluminum in deals, is causing a chilling effect in the entire aluminum market.

Physical delivery premiums are also falling worldwide. Reuters reports that South Korea’s state stockpiler bought 2,000 mt of aluminum at a premium of $330/mt over LME cash. That’s the lowest level in a year. Our own Stuart Burns reports that, in Europe, premiums for aluminum without duty have gone from $425 in November to $305 and that much of the fall can be attributed to the fact that “the stock and finance trade is not the game it was 12-18 months ago, so those hedge funds and banks previously engaged in that activity are not sucking up metal in the same way.”

How rapidly these declining physical delivery premiums will affect the aluminum market is unknown even by the major players, but companies such as Alcoa are diversifying themselves away from primary production of the light metal.

If the metal continues to exit the LME system, however, would the exchange’s goal of supply transparency actually be served? Much of this metal is moving to off-warrant warehouses and not going into immediate production. The new rent-capping and decay measures the LME is discussing implementing would take away an incentive for LME warehouse operators to keep metal in a queue and likely give players in the market yet another reason to pick up their aluminum and take it off-warrant. The decay factor affects the rate at which queues are reduced under LILO (for a warehouse continuing to load in metal). 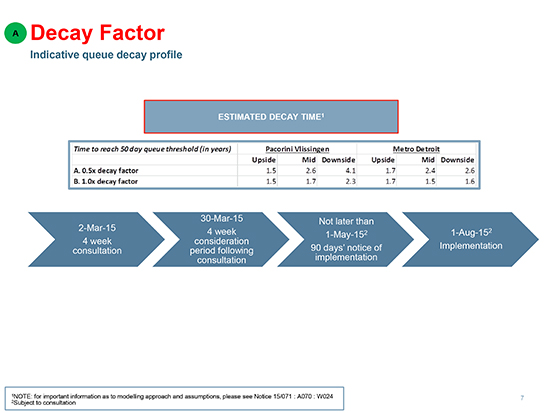 By accelerating “decay time” in a queue the LME wants to give another incentive to take metal out of warehouses with long queues. Source: London Metal Exchange.

Since the International Aluminum Institute stopped reporting monthly numbers, it’s nigh impossible to tell how much aluminum has moved to off-warrant storage.

Solving the 50+day queue problem at the warehouse operations at  Metro International in Detroit and Pacorini Vlissingen in the Netherlands would certainly be a good thing for users of the LME system, but it may not deliver the overall market transparency that exchange’s executives desire.