As someone who cut his eye teeth on a Yamaha YDS7 — yes, Google it and you’ll find they stopped making them decades ago — I have always had a soft spot for the Japanese manufacturer’s excellent two-stroke bikes.

Buying a New Car on an Overseas Vacation? Lock in Your Shipment Costs

On the track and in terms of sales, Yamaha Motor Corp. has always played second fiddle to their bigger rival Honda Motor Co. Ltd. but that has generally been a spur to innovation rather than a limitation. After a couple of abortive attempts in the past, Yamaha is finally getting serious, they say, about evolving from two wheels to four.

Personally, I am not sure it is such a great idea but if you are going to do it, this approach sounds better than the motorcycle manufacturer’s previous attempts. According to the Financial Times, Yamaha is teaming up with Gordon Murray, the former Formula One car designer, to launch a two-seater commuter vehicle in Europe as early as 2019. The design is for a two-door, two-seater similar to a concept car showcased in 2013 called the Motiv. 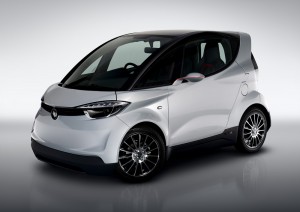 The idea is to combine Yamaha’s motorbike technology with Murray’s iSTREAM (Stabilized Tube-Reinforced Exoframe Advanced Manufacturing) system that features a lightweight steel frame with low production costs, which are imperative if it is to compete with the likes of General Motors’ Opel new city car called Karl which will soon launch a with a starting price of €9,500 ($10,100) in Germany.

That may not sound cheap to a US buyer, but in Europe car prices are up to 50% more than the equivalent in the US. The car will be made in petrol and electric versions, the FT says.

Gordon Murray’s iSTREAM manufacturing process majors in low emissions, both in manufacturing and over the life cycle of the vehicle, but while that may be a good selling point to city buyers, of more interest is the low weight and low manufacturing cost the process claims to provide.

According to the firm, Murray’s process achieves a lightweight and low-cost vehicle architecture using a combination of large-diameter, thin-walled steel tubes that are formed, laser-cut and profiled under CNC computer control, and then welded together. The approach Murray claims draws heavily on his Formula One experience and certainly seems a break from traditional manufacturing techniques. External panels are made from specially constructed glass fibre panels that show exceptional torsional rigidity far in excess of steel panels over time. It’s an interesting concept and the kind of thinking you would expect from a motorcycle designer like Yamaha, who powered much of their R&D on the racetrack, to embrace.

Yamaha probably feels it has to take bold steps to drive further growth. 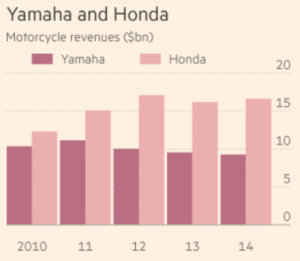 Since the current CEO, Hiroyuki Yanagi, took over in 2010, sales have increased more than 30% to JPY 1.5 trillion last year ($12 billion), while net profit reached JPY 68 billion in 2014, compared with a loss of JPY 216 billion in 2009. Yamaha Motor Corp.’s stock price has more than doubled in the past five years, yet profitability remains lower than the firm would like, and they continue to lag further behind their larger rival Honda.

Whether cars will be the solution to that, though, remains to be seen.

PREVIOUS POST:
Crude Oil Prices’ Fall Might Not Be Over Yet, Metal Prices Can Go Lower, Too
NEXT POST:
Alcoa Inc. Announces Layoffs, AK Steel Looking at a Loss