Home | Ferrous Metals | U.S. Steel Is Buying an EAF, Why Don’t You Have a Mini EAF? Grant Thompson Does
Commentary

U.S. Steel Is Buying an EAF, Why Don’t You Have a Mini EAF? Grant Thompson Does

The MetalMiner EAF in Review says the Jefferson County, Ala., Commission approved tax abatements on $277.5 million in capital investments on U.S. Steel’s investment of $230 million in an EAF for the existing steel mill just outside of Fairfield, Ala. 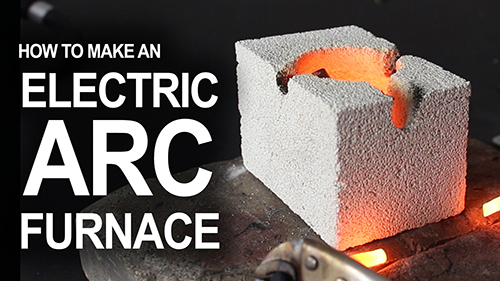 Image Courtesy of Grant Thomson, King of Random, via YouTube.

U.S. Steel is joining the EAF bandwagon that Nucor Corp. launched in the late ’60s, a ride that has made Nucor the largest, and most profitable, steel company in the US. An EAF is a furnace that melts scrap steel via an electrical breakdown of a gas. Lightning, for instance, is a natural electric arc. While U.S. Steel is smart to cut its production costs via an EAF — just look at how much cheaper the costs are vs. using raw materials! — the question remains: can you build your own?

Wouldn’t it be great to have your own backyard EAF? You could make your own steel products — such as big, giant swords — from scrap such as old appliances and discarded steel or tin cans. Even if you’re not reusing the metal, you could melt just about anything.

My Very Own EAF

King of Random Grant Thompson explains how on YouTube. This lifehack shows how the electrodes from lantern batteries and an alumina-silicate refractory brick can be used to make your own mini EAF. There is also a nice tutorial on how to make your own zinc ingots here, too. If you’re very enterprising with your new zinc ingots you may even be able to sell them to the US Mint to make pennies and nickels. Yes, they will pay you more than one cent per penny, 1.8 cents per penny, to be exact.

Sure, you won’t be making long products such as I-beams or anything near the size of U.S. Steel or Nucor’s industrial-sized EAFs with your mini-furnace, but the principle is the same: melt scrap using an electric arc and make whatever you want with the molten results. Who knows? Maybe the federal government will take you up on those cut-rate zinc ingots. Aren’t electric arcs great?