Richard Branson famously said “If you want to be a millionaire, start with a billion dollars and launch a new airline,” well the same statement could probably be applied to iron ore mining.

Fortescue Metals Group Ltd., the world’s fourth-largest Iron Ore miner and once the darling of the Australian stock market has fallen from $35.8 billion in 2008 to a market value of $5.8 billion this week reports the Sydney Morning Herald. The reasons aren’t hard to find. Amid a massively oversupplied market the iron ore price has collapsed.

As a result, Fortescue had to pull plans to raise $2.5 billion of additional debt as the yield demanded by investors proved “unfavorable” in the company’s words. Fortescue’s existing unsecured 2022 notes are quoted at 75.8 cents on the dollar, a yield of 12.08%, while the company’s existing $4.9 billion term loan maturing in 2019 fell to about 90.25 cents on the dollar from 91 on Monday and 96 on March 5. Meanwhile, Fortescue’s shares fell 5.3% to $1.865 in Sydney on Wednesday, the lowest close since January 2009.

The big four iron ore producers and most analysts had expected low prices to have squeezed Chinese domestic producers out of the market by now. Their cost of production is generally way above current market levels but they have remained stubbornly in business and it has become clear that economics is not necessarily the deciding factor in China, particularly for state-owned and for mill-owned mines. 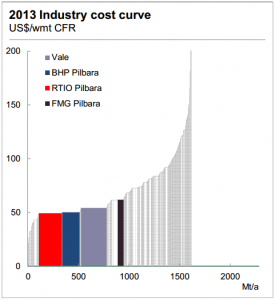 At current numbers, Fortescue (FMG Pilbara above) is vulnerable. With little to suggest prices will recover there is more risk to the downside than up. Back to the FT, analysts at Liberum, a London-based brokerage, are quoted as saying “We think this provides a clear incentive for the majors to continue to plow ahead with growth projects — Fortescue wouldn’t be able to deal with $50-a-ton iron ore for too long and members of the oligopoly are the obvious buyers of FMG’s assets from administrator.”

Although demand in China has weakened, BHP Billiton, Rio Tinto Group and Vale SA, the big iron ore producers, are still pushing ahead to increase production. The paper quotes forecasts that a further 100 mmt of capacity will hit the market this year. Yet, the FT quotes Melinda Moore, analyst at Standard Bank, saying, “Many believe the sell-down has been triggered by further environmental closures, forcing mill destocking. We think the market has simply caught up with China’s lack of industrial demand. As we saw from China’s power consumption figures, domestic industrial demand grew by just 1.3% year-on-year in January and February. While the steel industry has also had to contend with falling export orders, cutting into at least 30 to 40 mmt of annual demand.”

This isn’t just oversupply due to new mines. This is falling demand as well. Looks like it will get tougher for FMG and smaller producers around the world in the year ahead.