A recent article in India’s Economic Times is typical of recent coverage that makes much fanfare of India’s rise to 3rd-largest steel producer in the world at the expense of the USA which slipped to 4th in world steel producers.

The differences are relatively small, based on data compiled by World Steel Association (WSA) India’s production growth was the world’s highest during the January-February period at 7.6% to 14.56 million metric tons, compared to the US which slipped back to 13.52 mmt. According to the ISSB, India produced about 86.5 mmt compared to the  88.2 mmt from the the US, but the US is facing a strong dollar denting its export markets and — by way of that same strong dollar and massive global overcapacity — a tsunami of imported steel. According to the ITA in 2014, US imports of steel mill products totaled 40.2 mmt, a 37.9% increase from 29.2 mmt in 2013.

First, should we worry about India taking 3rd place spot from the USA in steel production?

Looking at it dispassionately, no. It is inevitable that an emerging market with a population of 1.25 billion and with a projected increase in its urban population from 400 million to 600mm by the end of the decade. At the same time as it industrializes and invests in infrastructure, India is going to need to build substantial steel capacity.

The US, on the other hand, has a mature industrial landscape with a quarter of India’s population and while it has some of the most efficient and lowest-cost steel production in the world it still operates in a high-cost environment with stringent environmental and health and safety controls that inevitably have an impact on the industry’s ability to compete in overseas markets.

So 3rd spot or 4th spot is really no more than symbolism. What is more important is whether or not the change tells us anything about global steel markets. Is India’s rise achieved unfairly by subsidy or state support as China is often accused of benefiting from? Although we laid out good reasons why Indian domestic demand would stay high and rise, in fact the country exports about the same percentage of its total production as the US and the trend is growing. So, not all of that steel is being consumed domestically and the country’s steel industry has aspirations to be a regional supplier not just meet domestic demand growth. 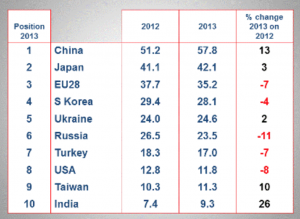 India is not a major importer of steel. Protected by import tariffs, India only imports grades and forms that it does not produce domestically, in tonnage terms relatively small beer. But even India complains of competition from China, although more as it fights for export markets than due to a flood of competition at home. 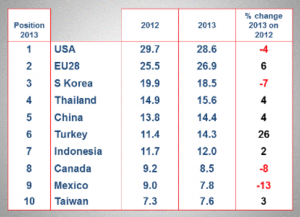 Back to those import figures into the US, you may be forgiven when reading the press in thinking China is swamping the US with steel products. Although China produces half the world’s steel and undoubtedly is flooding the world with steel products, its effect, generally (rather than in specific product segments), is one of displacement more than substitution. 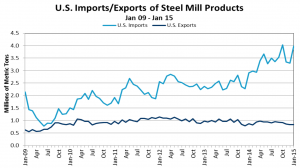 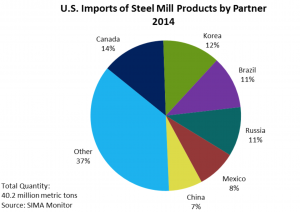 That rise in US imports is coming from traditional suppliers to the US market, Canada, Mexico, the EU, South Korea, etc. Admittedly, part of their desperation is due to fierce competition in their other markets by China.

Faced by Chinese competition in Asia, the Middle East and Europe, the US with its strong dollar is the best show in town, but that strong dollar is incentive enough to suck in imports without China or anyone else producing competition in other markets. As a result, US steel mills’ capacity utilization this year fell to 69.6% in March from 74.1% in the year to date position and 77.1% for the last twelve months.

All this is, at least in the short term, good news for US steel consumers. Steel and energy prices are both low and with iron ore set to weaken further there is little prospect of a pick up this year. But in the longer term, a healthy domestic steel industry is in the economy’s interest.

Whether that is best achieved by imposing anti-dumping tariffs on imported steel or in working with foreign governments to curb excess steel capacity, and in some cases subsidies, is a subject for a separate post, arguably one is a short-term solution the other a long-term one. But back to the original point, providing the US steel industry remains viable and healthy, we shouldn’t be too hung up about our position relative to still industrializing countries.