Hey HSBC, Where is That Supposed Zinc Deficit? 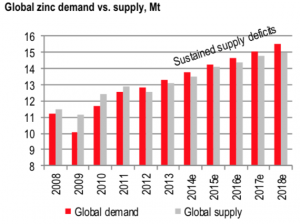 My colleague Raul de Frutos often says fundamentals are not relevant when looking at short-term price direction. It is the trend you have to follow, and for those in the zinc market the last six months have been as good an example of that as any.

The underlying fundamental narrative for zinc has been a market on the cusp of deficit for the last two years. The looming closure of major mines Brunswick and Century has fueled a bull story that the zinc market is going into a supply deficit and prices would rise as a result. As recently as January this year, HSBC was saying the market is already in deficit and will get worse as this graph from their Quarterly Metals & Mining Review illustrates.

So Where’s That Deficit?

The World Bureau of Metal Statistics said in their February report that the zinc market was in deficit by 262,000 metric tons during the January to December 2014 period, compared to a 95,000-mt surplus for 2013. Yet, the price has still declined, much to the consternation of bulls and many followers of supply-demand fundamentals who had expected the strength of the first half last year to be continued or at least held steady in the face of mounting supply shortfalls.

But it hasn’t. The price has fallen and an interesting analysis by Andy Home at Reuters throws some light on what may be going on. While he doesn’t throw cold water on the supply shortage scenario, he suggests there could be several dynamics at play that have both masked the true movement of metal creating confusing signals and mitigated the loss of supply from those end of life mines.

First, those investors we mentioned at the start are part of the reason for the price decline. Although no more than an indication of overall activity, the London Metal Exchange’s Commitments of Traders Report (COTR) shows that longs have moved to shorts, suggesting not just that investors switched when they saw the prices fall, but may well have created the fall by bailing out of long positions they had built up in the expectation of supply shortages that were not materializing.

According to Reuters, back in July — when the COTR was first published — money managers’ net long position amounted to almost 100,000 lots (2.5 million metric tons) and represented 22% of open interest. As of March 6 that collective net long had dwindled to 38,622 lots and just 9% of open interest.

Money managers have both trimmed long positions and increased short positions, the latter amounting to 72,622 lots as of that March 6 report, the highest level since the COTR was launched. Fundamentally, those falling zinc stocks that have been taken as robust demand have, in Reuters’ opinion, probably been no more than inventory moving to off-warrant warehousing, just like what was happening with aluminum.

As Home points out “when 91,400 tons of metal are canceled in a single day at a single location, as happened to zinc in New Orleans on Feb. 10, the volumes suggest a mass relocation, not a tapping of exchange stocks by users struggling to locate sufficient physical units.”

At the heart of the issue, though as it so often seems to be is China. Those mines that have closed or are in the process of winding down have removed supply from the market, but at the same time China has lifted mine production by 6.5% last year while, in the rest of the world, it fell by 0.7%.

Refined production tells the same story, in the rest of the world it fell by 1% but in China it rose by 14%. As a result, net imports into the world’s biggest consumer collapsed towards the latter part of last year and the country has been a marginal net exporter over the last four months.