Weak Growth Hampers European Markets, Euro Against the US Dollar

Some countries in Europe already have negative interest rates, Denmark and Switzerland’s are at -0.5% and -0.75% respectively, charging clients for the pleasure of holding their money, in an effort to stave of safe-haven status vs the euro.

Royal Bank of Scotland Research is not predicting base rates in euro-land or Japan to rise from 0.1% in 2015 or 2016, and in the UK they are predicted to only rise from 0.5 to 1.0% next year. That is a reflection of an almost deflationary environment and such weak growth that the risks to inflation are non-existent. 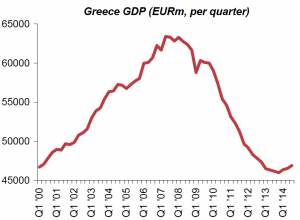 Far from just being faced with the risk of a Greek exit, the European Union is facing exceedingly weak growth in France and Italy, the currency bloc’s second- and third-biggest economies.

These are situations that would be more readily addressed by a significant loosening of policy in Germany to boost demand rather than Europe-wide quantitative easing, but that’s another matter. The risk is as much political, both Spain and Portugal have elections this year with aggressive minority parties keenly watching developments in Greece, as economic.

The EU can’t afford to allow Greece to default on its debts because it will immediately fuel demands from other quarters for the same treatment. Even France is being sanctioned by the EU for repeatedly exceeding its 3% of GDP budget deficit limits. France, too, would love to be let out of the German-led fiscal straitjacket constricting some European markets.

Every month that goes by causes the country more pain and fuels far-right and anti-euro sentiment. Every twist and turn in the Greek drama will cause volatility in euro/US dollar exchange rates, with considerable risk to the downside for the euro. We could well be seeing 0.95 euros to the US dollar this time next year from 1.35-1.40 during the first half of last year and 1.09 today.

The tragedy for Greece is after years of contracting GDP it was finally showing some growth as the new party came into power (see chart above from RBS).

Meanwhile, the UK has an election in just two months with the result too close to call. That will create significant volatility in the Great Britain pound-US dollar exchange rate until the color of the new government becomes clear towards the end of Q2.

With the UK so reliant on exports to Europe, growth will be held back by the EU, which is unlikely to see more than 1% growth this year, at best. But the pound has ceased to be a major currency and its fortunes will be buffeted as much by political and economic developments as events in the euro arena.

Emerging markets, at least in the form of China and India, will likely have appreciating currencies this year and next in spite of having broadly dovish central bank rate policies. RBS is expecting the yuan renminbi to move from 6.19 in Q2 of this year to 6.08 by Q1 of next year.

Over the same time frame, the bank sees the Indian rupee marginally strengthening against the dollar from 61 in Q2 to 59 in Q1 2016. South America’s largest economy, Brazil, is unlikely to go anywhere over the next 12 months in contrast, with the exchange rate fluctuating around 3.25 real to the US dollar as its economy contracts this year.

So while commodities appear subdued and inflation has been tamed just about everywhere, do not take it as read that exchange rates will be calm too. Quite the contrary, they may prove the most volatile of cost factors in the year ahead.