Is there no end in sight for iron ore miners watching the relentless fall in the price of their product?

“We hope not,” say consumers and steel mills, for whom the falling raw material cost has been a major element of lower steel prices. 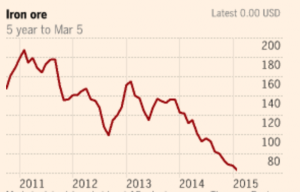 Rio Tinto Group, BHP Billiton and Vale SA are still making money. They are blessed with huge deposits and enormous economies of scale that allow them to dig and ship vast quantities of high grade ore at the lowest breakeven price, but many smaller miners are in danger of slipping into the red and failing to meet huge debt piles they have built up developing mines.

Big Three Race to the Bottom

According to the Sydney Morning Herald today, the iron ore price for immediate delivery at the port of Qingdao in China, dropped 4% on Friday to $53.14 per metric ton, the lowest level since the daily pricing index began in 2009.

The big three are continuing to invest in new capacity hoping to drive out higher cost competitors and gain market share, much like Saudi Arabia and some allies in OPEC are doing with the price of oil. The Australian number three producer, Fortescue, is said to have a breakeven point of $57 per mt, as is Grange Resources a smaller producer. Others are faring even worse. BC Iron has a breakeven of $61 per mt, while Atlas Iron‘s $64 per mt and Mount Gibson is $54 per mt.

Chinese producers are the real target of the big three, but in spite of estimated breakeven levels above $6 per mt only the smaller independents have closed or mothballed production. Many mines are state or steel mill-owned and are being supported in order to stay open.

Some have geographical advantages such as being close to steel mills or away from seaports giving them an edge. Even so, the FT reports Mysteel estimates that about half of China’s 1,500 iron mines will be forced to close this year, although this will only remove 20 to 30% of national capacity. Some three quarters of Chinese iron ore mines are said to be in the red at current prices but are kept open regardless.

As more iron ore capacity comes on stream this year and demand drops off in the face of overcapacity in the steel industry, Citi could see the price falling below $50 per metric ton. Most aren’t expecting a significant recovery in prices for three years, with ANZ suggesting $58 per ton by the end of this year and an average of $60 per ton for next year. This will be welcome news for steel consumers hoping weak raw material price pressures will allow steel mills to operate profitably without raising steel prices as the economy continues to recover.