Home | Commodities | Copper Prices, Still Searching For a Bottom, May Have Stabilized
Commentary

Copper Prices, Still Searching For a Bottom, May Have Stabilized

When will the fall in copper prices come to an end? Even the investment market can’t seem to decide with the Chinese shorting the metal and some western investors still long.

Certainly those following the trend line downward have done handsomely in the last six months – at least as far as January. 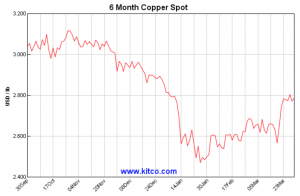 Since then, the price falls have stopped and the value of the red metal has stabilized. Is this the point at which it turns? Many analysts point to fundamentals when trying to explain the direction and extent of price movements and, in the case of copper that has largely been two factors.

First, a lack of demand in top consumer China where the housing market is in the doldrums with house prices falling and economic growth slowing from double digit growth at the turn of the decade. But as CRU points out, quoted in a recent FT article, Chinese copper consumption, although the weakest growth since 2008, still grew in this quarter by 0.7%.

It may not be growing as fast, but it is still growing. The other factor is ripples from the stone that was the Qingdao copper scandal are still creating choppy waters for the shadow financing sector.

Not only are banks less willing to open letters of credit to buy copper and use the funds to make higher-return investments following issues over title to the goods, but the backdrop to that trade has become less favorable. For the last couple of years an appreciating renminbi has made borrowing in dollars a one way bet. When settlement became due the currency had moved perceptibly in your favor reducing the debt while investments made with the funds also added a healthy return.

Copper inventories have been rising, both on the London Metal Exchange and on the Shanghai Futures Exchange, where stocks have doubled this year to over 224,000 metric tons 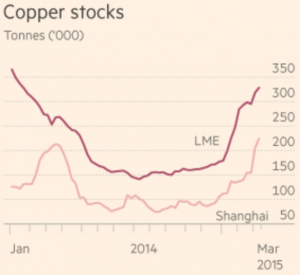 Domestic premiums to obtain spot metal have also tended towards a discount, according to CRU, while Gayle Berry, an analyst at Jefferies is quoted as saying “Consumers are nervous and unwilling to commit, while traders don’t want to hold too much material over fears that prices could drop further.”

The End of Falling Prices?

But all good things come to an end they say and so, at some point, will it be with the fall in copper prices, welcome as the trend has been for consumers. Mine supply has frequently surprised on the downside of late with Chile, in particular, offering warnings that it could undershoot predictions, but the most depressing dynamic to the copper price has been to demand and here even a slowly growing China does have the potential to surprise on the upside.

Many point to China’s lackluster housing sector, and, indeed, over the years that has been a major blank of both economic growth and metal demand but copper for railway electrification and power grid infrastructure are equally important here. After a quiet 2014, there are signs 2015 will see a considerable increase in investment in the power grid.

Prices have stabilized this quarter and while a resurgence back above $6,500 per ton is unlikely in the first half we could be in the second half looking back saying Q1 was the bottom of the trough.