Forgive us for continuing the discussion of a bifurcated electrical steel market – with some parts of the market increasing in price (the high grade material) and others holding steady (standard grades). As 2015 rolls on, we can’t help but see this trend that we called attention to back in December of 2014 only grow stronger.

Imports Up, Domestic Prices Down

In fact, Allegheny Technologies, a producer of standard-grade materials has lowered its GOES surcharges by more than 40% since the beginning of the year. In the meantime, AK Steel has dropped its GOES surcharges by some 55%. Meanwhile, GOES average import price levels are now up 10% from January levels but only slightly higher than year-ago levels. The increases come primarily from Japanese and Canadian origin materials.

Meanwhile, some stock analysts appear to be fairly positive about AK Steel, citing 2-3% growth in automotive builds. MetalMiner remains quite a bit more cautious on automotive growth. Our own Automotive MMI monthly index undoubtedly looks better than most of the metal indexes we track, but at 85 it has reached it’s three-year-low since we began reporting metal prices going into the automotive industry (January 2012 is the baseline reading of 100).

That same article also suggested a very positive GOES market for AK Steel since the company, “produces high-efficiency PCH grades in this market that should enhance its results this fiscal year.” We’d argue the company certainly produces M1-M6 grades, but does not produce the high-grade materials supplied by the Japanese mills or South Korea’s Posco, hence the price bifurcation.

Of course since the trade case, many manufacturers have realigned their supply chains to take advantage of lower cost imported material in neighboring Canada and Mexico.

As we previously reported, the US International Trade Commission created several new HTS codes to break out laminations, stacked cores and wound cores from the more generic category these materials have historically been classified under. Based on the most recent data available from Zepol, imports appear alive and well:

Laminations for incorporation into stacked cores saw imports of nearly a million dollars; growing at 16% month-over-month (February over January) with the lion’s share of that volume coming from Mexico.

But far and away the most interesting category to watch involves transformer parts which saw nearly $13.5 million in imported value coming mostly from Canada but also Mexico, Switzerland, China and India. 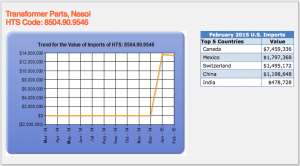 The US grain-oriented electrical steel (GOES) M3 price rose 7.4% to $2,791 per metric ton after falling the previous month.

US grain-oriented electrical steel (GOES) rose 1.6% to $2,598 per metric ton after falling the previous month.