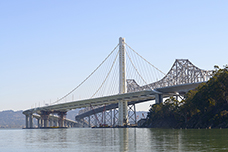 The US ranks 41st in the world in terms of the ease of gaining federal permits to proceed with construction or infrastructure projects, according to the 2014  World Development Indicators‘ Ease of Doing Business Index.

Philip K. Howard of Common Good, recently discussed with us how permitting, not funding, is the biggest obstacle to renewing and replacing the nation’s crumbling infrastructure.

Senators Rob Portman (R. – Ohio) and Claire McCaskill (D. – Mo.) have introduced a bill that requires the first chief permitting officer for federal agencies. The bill would impact projects that cost more than $25 million and receive federal dollars, which includes most interstate roads and bridges. However, it does not give the new CPO the right to force individual agencies involved with projects to make decisions or move forward on projects in a timely manner.

“It’s a multi-headed federal bureaucracy that we have,” Howard said. “The problem with their bill is the CPO doesn’t have any authority. He can’t lean on one unreasonable agency if it’s holding up a project. There needs to be a dialectic here. If any one of 19 different agencies involved (in the Bayonne Bridge project in New Jersey) decides it’s going to dig in its heels in, there is no alternative but to give in to what they want. That feeds the paralysis. There needs to be a presumptive authority somewhere. There needs to be someone who can cut through that. If that authority is too high-handed that won’t work, either. You want an incentive for everyone to be reasonable and agree to make decisions within a reasonable timeline.”

In countries that rate higher on the Ease of Doing Business Index, interstate road or bridge projects there is a permitting officer or a department designated as the one stop for permitting and review. You can’t ignore it. There is an internal mechanism where agencies inside the permitting process can, essentially, complain if their concerns are being ignored by the overseeing agency and its CPO.

Howard cited the Cape Wind Project is an example of a federal project where people in the agencies were definitely gaming the process to slow it down, and where the perpetual nature of the permitting process was helped to draw out political indecision. He noted that no process is going to solve that completely.

“In any business setting there is an officer in charge who is not just responsible of making decisions, this person can’t just do whatever he or she wants, there are various internal pressures this person faces,” Howard said. “The same is true of a one-stop agency. It still must be accountable and responsive to other constituents and satisfy the goals of the law. From the standpoint of the person or business trying to get a permit, they have to deal with the one authorized agency and all of those below it be extension.”

While state and municipal governments are generally more action-oriented than the federal government they’re not perfect, either. For an interstate project or one of national significance, Howard said, for projects with federal dollars,  there is not much of a choice but but to have a federal decision maker.

“The Portman-McCaskill bill is a start,” he said.  “(At Common Good) we are going to try to open up a public debate about what the best way to gain accountability is. The one thing we know is the current state of paralysis by dictate has tragic consequences. We’re dealing with decrepit infrastructure which reduces competitiveness while allowing 2 million jobs to sit on the sidelines.”