There are several potential sources of financial shock to markets this year but for the financial markets an exit from the Eurozone by Greece, while potentially serious, seems to have slipped from the headlines as being very unlikely of late.

Earlier this year, the press was awash with dramatic headlines on the probability that Greece’s new leftist government, led by the Syriza party, would lead the country out of the euro in protest at the punitive terms placed on the people in return for Europe’s continued support.

Kicking the Greek Debt Problem Down The Road

The domino effect of other ClubMed countries voting in equally anti-austerity parties was raised as the nuclear result of a Greek exit. But the rounds of meetings between Greece and the Troika got so tedious and the progress so glacial that the markets began to lose interest as the problem of how Greece was to repay its debts seemed to be kicked down the road. First by weeks, then by months.

But it would be a mistake to think that the problem has gone away. Central to Greece meeting its terms is the ability of the state to raise sufficient taxes to meet debt repayments when they come due.

The country’s debt pile has risen form 154% of GDP in 2012 to 177% in 2014, that’s a staggering €317 billion (or $336 billion). Syriza’s problem could be said to be of Syriza’s making. The party came into power on a wave of public support and optimism based, in large part, on what they promised in the election campaign, backed by the threat that if the EU didn’t agree Greece would leave the euro.

Once in office, though, they immediately reversed certain austerity steps but, more significantly, both business and the population positioned themselves for what they expected to happen next. Companies and individuals sent funds overseas in expectation that Greece may leave the euro and any funds held in Greek banks would be converted into Drachma (or whatever would replace the euro) at a much lower rate.

As a result of the cash outflow, the country’s banks are being kept alive through emergency funds (ELA) from the European Central Bank. The ECB has been forced to hike the limits on this cash on a weekly basis as capital has fled the country, a London Telegraph article reports. A further €800 million was drip-fed to banks on Tuesday to keep them solvent. What’s worse is that everyone stopped paying taxes as the money fled Greece. Treasury receipts have collapsed as this graph from the FT shows. 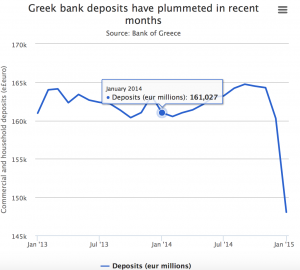 At the same time, Greece’s primary budget surplus, which excludes its debt interest payments, shrunk to just €1 billion during January and February, compared to €3.17 billion over the same period in 2014.

While the nation has benefited from very low interest rates provided by the ECB and International Monetary Fund, there is a gaping hole opening up in its public finances.

Economist and New York Times Columnist Paul Krugman has argued that the situation Greece finds itself in is not as dire as most people believe and that repayment is an entirely practical proposition, but that assumes Greece is willing to live with the timeframe involved.

Such models suggest it will be the middle of the century before Greece pays down its debts and, meanwhile, the population will inevitably suffer a loss of domestic investment and growth as a result, particularly under the Germanic austerity model that northern Europe has imposed. In recent weeks, Syriza has stepped back from issuing quite such bold claims as it did late last year and early in this one.

The realization seems to have set in that compromise may be easier than exit, but if Greek businesses and the general population don’t start paying their taxes again and treasury receipts don’t pick up, no end of compromise is going to change the fact there will not be any money to pay for anything – and the Eurocrats reach their limits in extending further credit even though it’s not their money but that of their taxpayers. Greece still has the potential to go horribly wrong this year.