What Next After Lithium-Ion Batteries, Magnesium? Sodium?

Barely a week passes without some snippet of news from one university or research lab hitting the media about another battery development heralding a major breakthrough in technology.

To gauge by the number of announcements we should be enjoying unlimited storage at near-zero cost by now, but according to the journal Nature the reality is the energy density of rechargeable batteries has risen only six-fold since the early lead–nickel rechargeables of the 1900s.

Modern lihium-ion batteries are ten times cheaper than the first commercial versions sold by Sony in 1991 but, in terms of energy density, Nature says they don’t hold much more than twice as much energy for a given weight. This raises a key issue for some applications: for grid storage, density is not an issue. Capital cost, maintenance and longevity or recharging cycles are paramount.

For electronics, the number of cycles is less crucial as batteries can usually be swapped out after a couple of years so energy density, cost and recharge time are more important. Electric cars are generally considered to be similar to electronics, but, in reality, one of the major hurdles to adoption of electric cars is the upfront cost.

Many users can learn to live with the 400-kilometer range of a Tesla, but less can afford the upfront cost. A fair part of which is the batteries, so it is believed lower battery costs would help drive uptake of EVs as much as the more widely discussed range issue.

You would think if we can get a man on the moon, we could develop a better battery but part of the challenge (and the opportunity) seems to be there are just so many permutations of chemistry that could be used. One alternative to lithium could be the use of magnesium. It carries two positive charges compared to lithium’s one, holding out the possibility of much greater charge density, but magnesium moves through current electrolytes like treacle compared to lithium, so one researcher at the Lawrence Berkeley National Laboratory is using a supercomputer to crunch through a thousand different possible electrolyte permutations to find one that may, theoretically, be more suitable. Researchers at the University of Illinois at Chicago are reported to be making encouraging headway in the selection of suitable electrodes to work with magnesium ions, but they are still a long way from a commercial battery.

As with most major steps forward in science, the private sector is too risk averse to invest in cutting edge research and so while firms around the world are looking at incremental improvements it is down to organizations such as the US Department of Energy to fund a $120 million project at the Joint Center for Energy Storage Research (JCESR), based at the Argonne National Laboratory near Chicago to look for game-changing innovation. JCESR has been working for the last couple of years with the target of producing a battery five times more energy dense than the standard of the day, five times cheaper, in just five years from their 2012 start. That means hitting a target of 400 watt-hours per kilogram (Wh kg−1) by 2017. 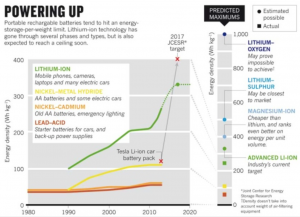 Illustrating just how challenging that is, this graph also mentions on the right some of the more cutting edge areas of research using alternative metals or alternative processes such as oxygen “breathing” batteries that take oxygen from the air and therefore, in theory, could achieve much better energy density as they would not have to carry around one of their ingredients.

Of course, for every enthusiast of a particular line of research there are as many or more protagonists. In many ways that’s what makes it such an exciting area of research. Undoubtedly, the financial rewards of a major breakthrough would be very significant, whether it proved more viable for grid storage where intermittent renewables are proving a major challenge for overall grid economics or for automotive, where unit cost and range both are seen as major stumbling blocks in wider acceptance of EV products. One way or another, though, metals, with their innate ability to carry charge, are likely to remain front and center in whichever technologies achieve success.