I always think it harsh, particularly for those of us sitting in northern Europe often under leaden skies, that the Middle East is not only blessed with vast reserves of cheap and easy to extract oil and natural gas, but even more limitless supplies of sunshine.

When the oil runs out they will become the powerhouse of the world again, but this time generating electricity. True sandstorms in desert areas are a source of considerable maintenance and repair cost, but clearly aren’t a major hindrance as solar and wind farm investments have boomed in 2014 driven increasingly by economics, not subsidies.

Japan and China Investing in Renewables

After all the hand wringing we have done over the years about subsidies paid to wind farms, it comes as a welcome development to report that some 95 gigawatts of increasingly economic renewable generating capacity was created in 2014 at a cost of $270 billion, led by China and Japan who combined, invested $75 billion in solar power.

This is the largest level of new renewable capacity (not including hydro-electric) in one year, at least in terms of GW of capacity. The previous higher spending year, 2011, resulted in lower levels of installed capacity because costs were so much higher then.

According to the Financial Times, equipment costs have fallen 75% since 2009 while large solar construction and connection costs have fallen by up to 65% in the last four years and solar panel efficiencies are rising making such projects increasingly attractive.

Thierry Lepercq, chairman of Solairedirect, a French company that has 57 solar parks built or under construction around the world said, “We’re generating power at lower prices than other energy sources in Chile, India and South Africa.”

To illustrate the opening point, earlier this year Dubai’s state utility awarded a contract for a solar power plant to the ACWA Group from Saudi Arabia that will sell electricity for less than 6 US cents per kilowatt-hour. That is at least 2 to 3 cents cheaper than electricity generation from natural gas in Dubai, a region that is awash with the stuff.

One driver for such regions, it must be said, is that conventional power production consumes large amounts of precious water, when an economic cost is put on that resource, solar wins.

Likewise, the FT reports that Georgetown, Texas, declared in March it was going to become the first city in the state to get all its electricity from solar and wind farms by 2017. Jim Briggs, interim city manager, is quoted as saying “Georgetown Utility Services isn’t required to buy solar or other renewables. We did it because it will save on electricity costs and (tellingly) decrease water demand.” 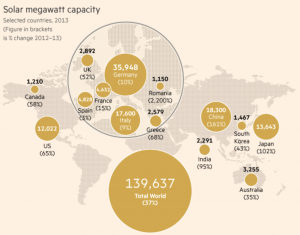 Not surprisingly, this map of installed capacity shows the greatest uptake in countries that have abundant sun plus either existing pollution problems or scarcity of water, or both. With the notable exception of Germany, where it has been spurred by massive subsidy, adopting early, less-efficient technology and high costs to consumers have not worked as well as adopting the newer renewable technologies later on in sunny, pleasant regions.

Still, the rest of the world has something to be thankful for. Someone had to lead the way, to create critical mass in manufacturing, even if it was subsequently put out of business by the Chinese. Decent percentage growth is occurring in cooler northern climes like the UK and Canada but with solar panel power output dropping to between 10-25% of installed capacity on cloudy days, higher latitudes will see the greatest uptake only as the technology develops further and can better cope with variable sunlight.

PREVIOUS POST:
Expect Low Scrap Prices to Continue, Despite Fall in Utilization
NEXT POST:
Turbulence Ahead: A Weaker US Dollar Might Help Commodities in the Second Quarter