Home | Premium | Exponential Technologies: What Are They and Will They Kill Buyers’ Jobs?
Commentary

Exponential Technologies: What Are They and Will They Kill Buyers’ Jobs?

Exponential technologies are those that follow Moore’s Law, e.g. technologies that double in performance relative to price every year or two.

The same doubling pattern now goes from 2 to 4 to 8 to 16… and before you have time to realize, within 10 years the same line has skyrocketed to above 1,000. 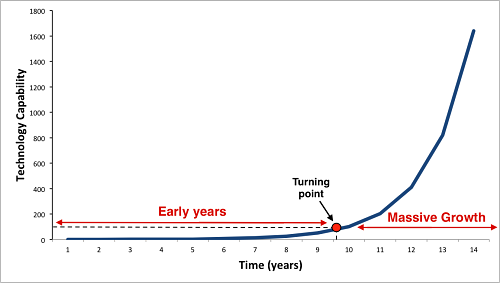 Examples of technologies already well ahead of the turning point are the Internet, where the number of users has grown from less than 1 million in the early ’90s to over 3 billion today; the power of laptops relative to their cost and mobile phone penetration, growing exponentially from 2% in 2000 to 65% today.

Today, a Masai warrior with a smart phone has better access to information than NASA did less than two decades ago. During the last 25 years the size of technological improvements has been bigger than all the improvements made over the last few centuries, and things can only grow faster and faster from now.

These technologies have the capability to change the whole industry and disrupt large companies in a matter of a few years. A well-known example is Eastman Kodak. Back in 1975 the digital camera was invented by one of its engineers. By that time, Kodak never understood how a 0.01 megapixels camera could compete with its camera film market and they ignored the technology.

In 1996 Kodak had a monopoly, controlling 90% of the film market but by that year the digital technology had already hopped on an exponential growth curve. From there, it took less than a decade until this exponential technology completely disrupted the traditional film market, eventually causing Kodak to file bankruptcy in 2012.

In the following posts, we’ll study the forces that are helping these technologies grow at an even faster pace. Also, we’ll analyze in more detail each of these new exponential technologies and how they will soon change things from a procurement perspective.