Iron Ore Prices on the Rise

Iron ore has now gained more than 29% since early April when it was trading as low as $47.08 a metric ton.

The dramatic turnaround has been fueled in recent weeks by BHP Billiton‘s decision to slow its rate of production growth. The market has taken this as the start of greater market discipline by producers. A rebound in iron ore shipments following the end of the Chinese New Year has added to a sense that the worst is over and the bounce back has begun.

Over the past month, three of the world’s four largest seaborne iron ore producers have suggested they will make adjustments to production volumes, Rio Tinto Group being the only dissenter but Chairman Jan Du Plessis told shareholders at an annual general meeting in Perth that our share of the seaborne trade today is 20% and a decade ago it was 20%., suggesting the firm is not trying to drive competitors out of the market simply to maintain market share. That may be the case but Rio’s 20% is of a much larger pie today. The company plans to ship about 350 mt of iron ore in 2015. 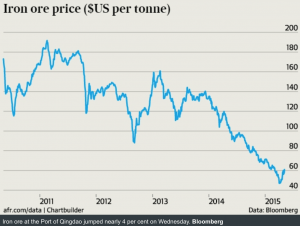 A report by CNBC meanwhile says steel production remains robust in China, the world’s largest market for seaborne Iron Ore, but overcapacity is reaching chronic levels with demand for steel in China contracting for the first time in a decade in 2014, falling by 3.3% on-year, and is set to drop by 0.5% on-year in both 2015 and 2016, according to World Steel Association (WSA) forecasts reported by CNBC.

The surplus is going into exports, which soared by 50% year-on-year in 2014 and surged by a further 40% in the first quarter of 2015. Protectionist gates are being thrown up around the world as a result, from Europe to India, North America to South America barriers are going up against the flood of Chinese steel and ultimately China’s ability to export its way out of its overcapacity will be limited.

Driven by economics or government pressure, or both, production is going to have to be reined back and, with it, demand. As a result we believe the recent rise in iron ore prices may be short lived, by H2 2015 we could see prices fall.

UBS, the Swiss bank, agrees saying the price could drop back to $45 per ton in H2 as exports from Australia continue to grow, albeit slightly slower than previously expected. In reality this newfound “market discipline” is no more than optimization of currently planned capex, new projects such a Rio’s Hancock Roy Hill will shortly add to capacity. Indeed the bank believes iron ore prices are likely to remain low for a number of years, not climbing significantly until toward the end of the decade.