Gilbane: US Will Post Highest Construction Growth Since 2007, Despite Slow Market

Gilbane, Inc., recently released its Spring “Building for the Future” construction economics report and predicted that even if new starts growth were to turn flat for rest of 2015 (which is not expected), starts already recorded over the past 12 months indicate spending for nonresidential buildings in 2015 will increase 15% over 2014, the best growth since 2007.

Nonresidential new starts have been increasing at an average of 16% per year since a post-recession low was reached in 2012.

The Gilbane report states that nonresidential building starts from April 2014 through February 2015 reached the best three-month average and best six-month average since July 2008 this month. 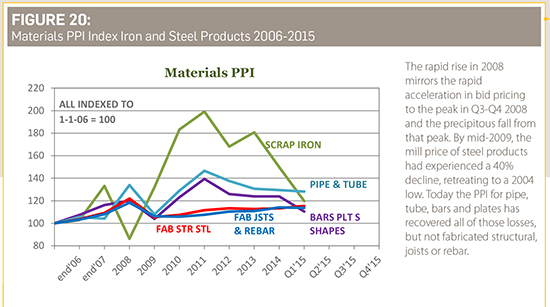 The US Census Bureau Producer Price Index (PPI) data for February indicates the PPI for construction inputs increased 0.4% in the month but is down 3.9% year-over-year. Source: US Census Bureau

On the year-to-date, US mills have operated at an average utilization rate of 72.9%. This leaves considerable room for capacity expansion and this will tend to hold down prices.

In the last 12 months, the Producer Price Index for copper and brass mill shapes is down 10%. Source: US Census Bureau.

PREVIOUS POST:
Can Indian Copper Demand Live Up to the Hype?
NEXT POST:
May…be a Rebound in Metal Prices?