An interesting post in the FT by a leading economist examines the growing concern that seven years after the financial crisis and the use of unprecedented stimulus measures and extended near-zero interest rates,the world may be stuck in a long-term trend of low growth. 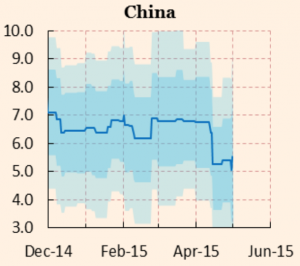 The three largest independent economies are all struggling to achieve strong growth. Chinese activity dipped sharply last month, and the estimated rate of growth is now 5.3%, well below the government’s 7% target for the 2015 calendar year leading many to hope yet another stimulus is on the way, but so far we have not seen much more than a relaxation in lending and reductions in interest rates.

Japanese growth remains weak in spite of Abenomics. Remarkably, after recessions in parts of the Eurozone the only major economy showing some resilience is the EU where overall growth could be approaching 1.8% in spite of excessive austerity measures. 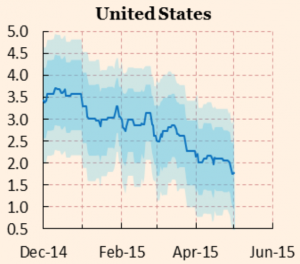 In the US, the official GDP growth rate in Q1 was only 0.2%, while Davis’ model of underlying activity is showing 1.8%. This may, as in some previous years, be more down to a weak first quarter due to weather but the real worry is that the rate of productivity growth is slowing and with it the potential for a long-term rise in living standards and, hence, growth. The long-term growth rate of the US economy has fallen from 3.3% in 2003 to 2.3% now. 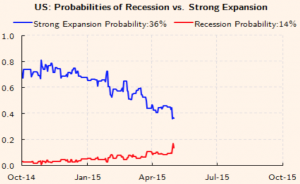 Davis cites a colleague’s research that tracks two measures of US activity used to summarize the “state of the economic cycle,” shown in the graph above.

The expectation is that US growth will rebound in Q2 but will not be enough to raise 2015 growth as a whole and could well result in a downgrade for the year as a whole. It’s hard to see China, the engine of growth for the last ten years or more, suddenly creating the level of demand that will significantly lift global GDP in the next few years.

Japan has tried and largely failed to pull itself out of years of stagnation and is likely to achieve only meager growth. The rest of the world probably has little faith that Europe is going to suddenly become a tiger economy, with so many intrinsic issues of aging populations and inflexible labor markets it will, at best, play catch up for its recent years of stagnation.

So, with little left in the Fed’s armory it is down to the US economy to find the optimism and confidence to invest some of that pent up corporate cash and drive growth, or today’s slow down could become the new normal.