When pharmaceutical manufacturer Biogen Idec planned a new headquarters building in Boston’s growing Kendall Square tech center, they knew the construction and program needs of the 325,000-square foot, five-story project would be a challenge for the architects, engineers and general contractor selected.

Cambridge, the suburban Boston municipality Kendall Square is located in, had a zoning requirement that all projects stay under 75 feet. That meant architect Spagnolo, Gisness and Associates had to cut its original plan for a six-story building down to five stories. 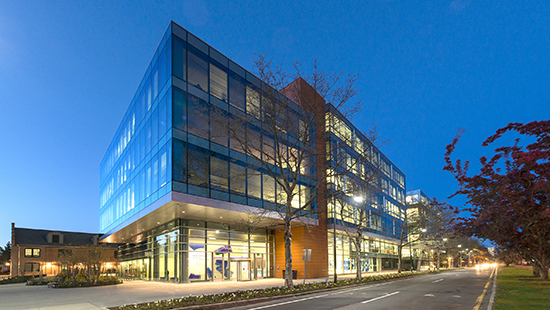 Biogen had its own needs, too. The company wanted to break down barriers between its management and employees and encourage collaboration among its scientists and researchers through the architecture of the building.

The new global headquarters has no private offices, just individually designed workstations called “I spaces” and common “huddle rooms” for private phone calls or spontaneous meetings. The company scrapped telephone landlines for employees, who are issued laptops and headsets.

Panels in the ceilings and floors can be brought down to add soft walls and subdivide rooms for smaller group collaboration.

“The idea was to bring everyone together, no separate offices for executives or private areas for senior management, everyone has the same office in the open floor plan,” said Malisa Heiman, senior associate in the real estate and site planning for Biogen.

Schedule and project savings on the Biogen project.

By using 3D building information modeling, Consigli and SGA were able to design and deliver a composite slab system with steel trusses. All trusses were prefabricated, some smaller with penetrations and spaces for mechanical systems in beams. Prefabricated steel was able to deliver the floor heights Biogen wanted and create a place to hide the building’s mechanical necessities.

Consigli and SGA were able to shave the entire mechanical floor off the building and achieve the 75-foot zoning height required by putting the mechanical systems in the steel frame. With the utility floor squeezed into the building’s steel frame, the project was completed seven months early and $2.3 million under budget. Biogen took occupation in late 2013. The artifact handed over for facility management was a 3D model. 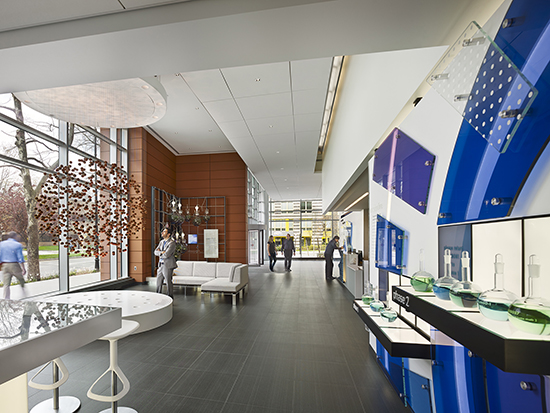 Flexible space for collaboration was key for Biogen’s scientists and other staff in the open floor plan. Photo: Halkin Mason

“We demanded detail early on. The level of coordination allowed fabrication to start more quickly,” said Andy Deschenes, director of project services and innovation at Consigli.