Many of us have become intimately familiar with the concept of “light-weighting” within the automotive industry. 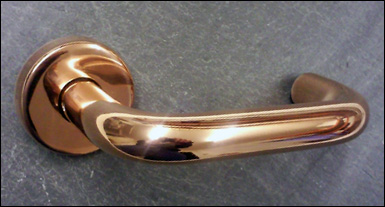 Does copper hold the key to keeping microbes from moving from door handles to hands?

But fewer folks know that another battle has begun in the health care field, around hospital-acquired infections – one that we will dub “Copper Wars.” The difference between Car Wars and Copper Wars, however, involves life or death (editor’s note: not death in all cases, but serious illness that could lead to death).

What are the Copper Wars?

We will come to that in a moment. First, a bit more context on the “life or death” part.

According to the Office of Disease Prevention and Health Promotion, HAI (hospital-acquired infections or, as the federal government calls them, health care-associated infections) are defined as infections that people acquire while they are receiving treatment for another condition in a health care setting.

And the size of the problem, by all estimates, appears massive.

Health Care Financing Review’s cost estimates of HACs (this study calls them Hospital-Acquired Complications) equate to 9.4-9.8% of hospital inpatient costs. The study estimates total hospital inpatient costs at a whopping $940 billion annually. That means we all face an $88 billion problem. The “we” in that statement refers to both private insurance companies as well as the federal government, and ultimately taxpayers. Others peg the problem at a bit lower, between $28-33 billion annually.

Either way, it’s a big number.

A Pareto analysis likely applies to HACs. In other words, a few types of infections likely cause 80% of the problems. According to the Office of Disease Prevention and Health Promotion, these infections tend to fall into one of the following 4 categories: urinary tract infections, surgical site infections, bloodstream infections and pneumonia.

Moreover, the cause for many of these infections stems from lots of the reasons most of us have read about – contamination of the health care setting, surgical procedures, medical devices, needles and tubes used for blood work, catheters, endotracheal procedures along with contagious diseases between and among health care workers and patients, among others.

Not surprisingly, given the sheer size of the problem, the US government has developed a multi-pronged strategy. Some of the major components of the “National Action Plan to Prevent Health Care-Associated Infections: Road Map to Elimination” include strategies for front-line clinicians such as reducing inappropriate and unnecessary device usage, improving hand hygiene, following barrier precautions, and deploying and improving “antimicrobial stewardship.”

In addition, the strategy calls on clinical leaders and executives to show leadership and support, and to implement a culture of safety.

In terms of governmental or policy interventions, the strategy calls for regulatory oversight, enhanced financial incentives, better use of technology, and improved public reporting of data (MetalMiner will post links of individual hospital performance on HAIs in a subsequent post) and enhancement of public/private partnerships.

The metals industry – specifically, the copper industry – has responded to the challenge with some innovations that certainly go a long way toward “antimicrobial stewardship” as well as barrier precautions.

In this follow-up story, we discuss how copper could become the lynchpin in reducing hospital-acquired infections.

PREVIOUS POST:
The Stock and Finance Trade: Coming to the Rescue of Aluminum Premiums Again?
NEXT POST:
US Construction Spending At Highest Level Since May 2012