The Stock and Finance Trade: Coming to the Rescue of Aluminum Premiums Again?

Asia has led the fall due to weakening regional demand and a flood of Chinese semi-finished products hitting the market. In part, some of this Chinese material is said to be destined for re-melting and, as such, is replacing primary ingot sales in the region but our belief is this is limited, as much by economics as anything.

The Shanghai Futures Exchange metal price is not at such a discount to that of the London Metal Exchange to make the re-melting/reselling trade even profitable.

To produce an extruded or rolled shape of any kind incurs a processing cost and, as such, any shape exports are going to be at a premium to SHFE primary metal. It is more likely that Chinese exports are simply replacing sales from regional extruders and rolling mills, reducing primary metal demand and leaving the area awash with primary inventory. As a result, premiums for new ingot sales have collapsed.

Reuters reports this week that premiums have dropped to $100-110 per metric ton for in-warehouse Singapore metal, down from $150 two weeks ago and $400 in December. In South Korea, May tenders were said to be awarded at $135-145 per mt and the country is sitting on nearly half a million tons of primary metal inventory. Premiums have dropped in Europe and North America, too, but are said to be stabilizing for the time being, although most are expecting further falls in North America.

Interestingly the LME has returned to a healthy forward price curve, as it did in times of plenty from 2009-2014 when the stock and finance trade flourished soaking up excess supply. 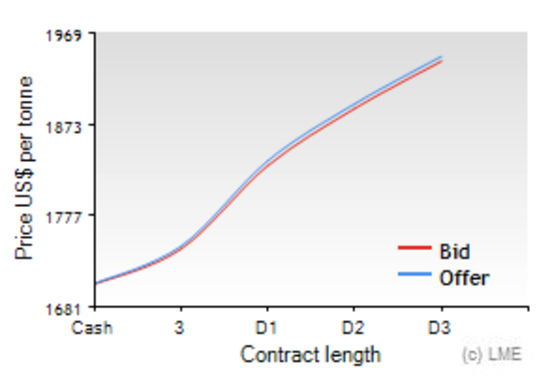 With such a strong forward curve and low interest rates all it needs is a little appetite from the hedge funds and banks, with some encouragement from warehouse companies to store metal, and bingo! Excess inventory rapidly gets sucked up into long-term storage.

According to Reuters, some warehouse companies are starting to offer incentives or discounts on storage costs of around $70 to draw in metal. The foundations are in place for a pick up in stock and finance activity, and the possibility that “demand” created by that activity could support premiums at least at or around current levels and potentially, at least in Asia, to raise them up.

Most are expecting LME prices to fall further; it is entirely possible LME prices could fall while physical delivery premiums could rise. That was exactly the situation we had in 2012-13 and the LME changed its rules to avoid it. The next six months could test the system, let’s see.