Crude steel output will shrink as much as 2% this year, according to Bloomberg reporting data from the China Iron & Steel Association.

That’s lower than the group’s March estimate of a 1.1% decline and would be the first contraction since at least 1990 the paper says. Crude steel output will shrink to 807 million metric tons this year from 823 mmt in 2014, according to the steel association as producers shut capacity. 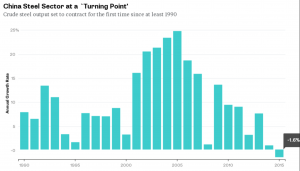 The reduction is being driven by a number of factors but profitability, or the lack of it, seems to be the greatest. Iron ore prices have risen by 40% in just two months as low port stocks at China’s ports suggested a tighter supply market Reuters reports. The market is speculating that producers and traders are holding back supplies in an effort to push up prices but top producer Rio Tinto Group pours cold water on that theory saying they are not in the business of playing the market month by month and supply is plentiful.

Supply Up, Demand Down

The firm will likely ship 350 mmt this year, up from 300 mmt last year. Lower seaborne iron ore prices in Q1 appear to have finally taken their toll on domestic iron ore producers, though, with production dropping 11% in the first five months of 2015 as higher cost producers have been squeezed out. 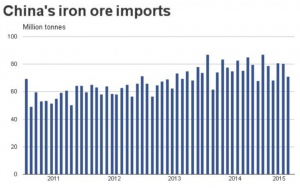 Few are expecting iron ore prices to remain elevated with steel production falling and supply plentiful, iron ore prices are likely to come down from here. Steel reinforcement bar (rebar), has fallen 14% the current quarter to 2,265 CNY per mt ($365/ton) as of Friday, the lowest since at least 2003, according to data from Beijing Antaike quoted by Bloomberg.

The construction sector has been hit particularly hard, as evidenced by the amount of land purchased for real estate development falling 31% in the first five months of this year and new construction starts slumping 16%, according to the National Bureau of Statistics.

The paper quotes Goldman Sachs saying about 35% of China’s steel demand is related to housing and construction-related activity. Led by construction, China’s apparent steel demand fell 4% to 302 mmt during the first five months of 2015, a reversal from 3% growth in 2014. Meanwhile, exports have surged further underlying the excess domestic inventory position.

China exported a record 10.3 mmt in January and shipments in the first five months of the year were 28% higher than the same period in 2014. At that rate, the country ships out more than any other single country produces, according to data from the World Steel Association; an untenable situation in the long run prompting widespread anti-dumping actions in Europe and the Americas.

To what extent profitability will play a role on China’s steel production in H2 remains to be seen. Most expect iron ore prices to fall, reducing supply-side cost pressures for steel producers even if it does little for demand. Reuters quotes Julius Baer estimates of $40 per mt as a possible low point for iron ore and Citi seems to agree saying, “We expect iron ore prices to reverse sharply and decline over the coming months,” averaging $51/mt this year and $40/mt in 2016.

While a few boosters are looking to infrastructure, such as Russian-Chinese pipeline projects and electrification as future drivers of increased steel demand, most are not seeing any increase in demand anytime soon.

Indeed, Li Xinchuang, CISA’s deputy secretary-general, is quoted by Bloomberg as saying in an interview this week: “Low prices will be with us for a long time. So will tepid demand and zero growth, or even contraction, in output.”

That doesn’t bode well for the rest of the world seeing high levels of Chinese steel exports, even when anti-dumping cases are successful in blocking direct Chinese steel exports to a particular market, there is still the effect of diverting that supply to other markets and driving down global steel prices as a result.