Home | Macroeconomics | Grexit? Not Yet, Greece is Still in the European Union… For Now
Commentary

Grexit? Not Yet, Greece is Still in the European Union… For Now

Greece seems to be teetering on the edge yet again.
Free Webinar: Are You Speculating When You Buy Spot Metals?

We wrote last year, and this year,  as the Greek crisis waned and the international media assumed the problems had been solved that Greece had the potential to come back and make a re-appearance and it certainly has.

If the troika of the European Central Bank, the International Monetary Fund and World Bank don’t agree on a way forward to release further funds, Greece will default on it’s €1.5 billion repayment due to the IMF at the end of June and the €3.5 billion due to the ECB on July 20.

These are sizable sums of money for a government with no reserves and struggling to meet monthly wage bills, let alone pay suppliers for goods and services, an obligation it has foregone for some months now.

A last minute reprieve may be on the table with proposals the leftist Syriza government coalition has put forward this week. Finally these include proposals to address at least one of two key sticking points. First is raising the pension age to 67, the sticking point is the time frame, both when to start and when the process should conclude.

Athens wants it to be phased in up to 2025 but the troika want it faster. Still, it is at least being discussed now and shows potential. Greek pensions are probably un-payable in the long run as this graph below underlines. Ultimately, a state pension has to fall somewhere in relation to the country’s ability to pay and Greece can’t afford for workers to retire in their early 60’s or sooner and then receive anymore than a subsistence pension; the reality is the country can’t afford it.

In their defense, it should be said, according to the Greek government, 45% of pensioners receive monthly payments below the poverty line of €665. The pensions aren’t generous in overall terms, only in relation to the country’s ability to fund them and the relatively early age that they start. 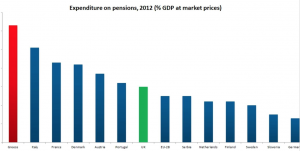 The other sticking point is Greece’s value-added tax and raising taxes, in general. The troika want 23% VAT rates to be applied on pretty much everything except food and medicines which would be taxed at a lower rate, but Athens is proposing a number of other sectors be included in the lower rate including energy. But Syriza is also proposing to squeeze businesses further by increasing corporation tax with a one-off 12% tax on corporate profits above €500 million.

The FT estimates it would raise an additional €945 million this year and another €405 million next year, but would eventually be phased out. The sticking point on the VAT is energy according to a Market Watch report with Athens adamant the VAT should not be more than 13% as this impacts the poorest in society disproportionately but the irony is no one is paying their energy bills, anyway. Last week, the Greek electric power authority reported that its unpaid bills reached €1.9 billion in 2015, more than enough to meet the IMF’s end of month payment on its own.

A more lasting proposal from the government is to raise overall corporate taxes from 26% to 29%, bringing in an additional €410 million next year – assuming companies pay it, of course. Tax revenue is one of the fundamental problems in Greece, whether corporate or private, tax receipts have collapsed particularly among individual taxpayers as people have simply failed to fill in tax forms while they wait to see what happens.

Meanwhile, defaults on bank loans are widespread, around 70% of restructured mortgages aren’t being paid and the banking system is freezing up. Government tax revenues for May were €1 billion short of the budget target exacerbating the state’s problems in trying to meet even day-to-day payments.

In the medium- to longer-term, Greece will need debt relief. To suggest the country can pay off its debts over the next 10-15 years is to consign Greek society to long-term austerity and, as we have seen with the election of the Syriza government, they won’t accept that.

For now, Europe will, for the sake of the Euro and appearances, muddle through with yet another 11th hour fudge. But Athens’ proposals will not be met in full. Pension payments will be higher, tax receipts will be lower and until Germany faces up to debt relief this problem will not go away.

Not that Greece couldn’t leave the Euro. It could and both Europe and Greece would survive but, politically, Euro block politicians do not want to admit the model is flawed and will continue to seek ways of keeping the shambles together. We don’t see a Grexit at this stage. It could come down the road, although northern European politicians are clearly getting more than exasperated with the situation, they are likely to find a way to make it work. Or at least keep the show on the road and continue to advance good money after bad in the hope something will turn up or it won’t blow up until they are out of office.