Hawaii’s blessing is also its curse.

So successful has the state’s switch to renewable energy been that at times the small island grid systems are creating too much energy, or conversely, others are generating too little. Unfortunately, the significant swings in power supply cause enormous system management problems. Hawaii is not alone of course, the islands display a microcosm of what most countries with a significant proportion of renewable power generation suffer: coping with the variability of renewable power supply.

The Smaller the Grid, the Bigger the Shifts

According to the WSJ, though, the smaller the grid the harder it is to manage and they don’t get much smaller than Hawaii’s. Every island has its own grid, none of them connected to any other, compared to the US mainland where just three grids cover 48 states.

The larger the grid, the more capacity it has to absorb fluctuations in power levels. The islands still burn oil for 70% of their power pushing power costs to 34 cents per kilowatt-hour; as a result there has been a massive adoption of solar panels and wind turbines. On Oahu 13% of residential utility customers have solar panels, unprecedented in the US, even compared to green California or super sunny Arizona. 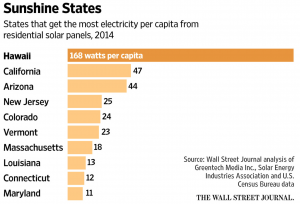 In Hawaii, at any time, up to a third of power could be coming from renewables. If a cloud passes, power levels fluctuate significantly. On Maui, the WSJ reports peak electricity demand is about 200 megawatts. The island has 150 megawatts of renewable capacity, half of it consisting of wind turbines. That means sometimes as much as 75% of power generated comes from variable sources like the wind and sun.

Storage Smoothes Out Peaks and Valleys

Fortunately, recent changes to the local grid make the power being produced more manageable and sensors give utility operators a little more warning when sunshine or wind levels rise or fall but the biggest benefits will come from being able to store excess power.

Being able to smooth out peaks and troughs by storing and releasing power will enable the existing grid to cope much better with changes in supply and existing conventional generators to operate more efficiently. It’s staggering that it has taken this long for utilities to install significant storage capacity, the problem is well known elsewhere but rarely as acute as in Hawaii. One of the utilities is seeking bids to create 300 mw of energy storage on the most populated island, Oahu. With such favorable economics and such acute power management challenges, the surprise is that it’s taken this long.