Home | Commodities | Study: US Mining Permitting Process Can Diminish a Project’s Value by Up to Half
Commentary

Study: US Mining Permitting Process Can Diminish a Project’s Value by Up to Half

The study, “Permitting, Economic Value and Mining in the United States,” commissioned by the National Mining Association, found that duplicative permitting processes can delay mining projects a decade or longer and those processes, both federal and state, are hindering US mining industry’s ability to meet a rising demand for minerals. 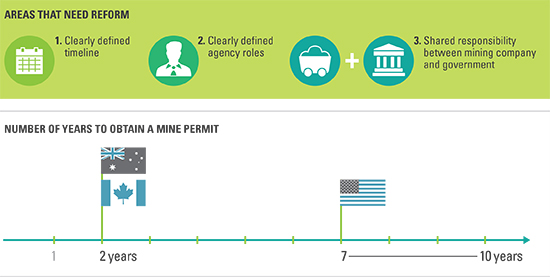 It can take three to five times as long to receive a mining permit in the US than in Canada or Australia. Source: NMA/Minerals Make Life.

Some mining projects lost as much as half of their value while awaiting state or federal approval. Three domestic mines in Arizona, Alaska and Minnesota served as case studies for the research. In one example, SNL found that after eight years of delay the value of Arizona’s Rosemont mine dropped by $3 billion. Alaska’s Kensington mine suffered 20 years of mining delays, while the capital cost of building the mine increased by 49%.

Where Have Exploration Dollars Gone?

“Why aren’t we attracting the exploration dollars we should be? Back in the mid-’90s we attracted about 20% of the worldwide exploration budget for mining. Now, it’s only about 7% and I do think it’s this delay on the return on investment that makes a big difference,” said Katie Sweeney, senior vice president, legal affairs, and general counsel at the NMA. “Are you going to put your money in Australia where you can get a permit in a couple of years or here where it’s 7 to 10? The process is definitely broken.”

The study details a veritable alphabet soup of permitting processes in all three states as well as the federal process. It quantifies incremental, production and additional risk. There is a comparison with the processes in Australia and nearby Canada in the report as well, one that’s not favorable to the US as both clock in with an average permit time of two years compared to seven or more for US projects.

The timeline for the government to respond is more clearly outlined in those countries, the permitting agency leading the process is identified from the outset and responsibility for preparing a well-structured environmental review is given to the mining company, not the government. In the US not only is a primary permitting agency not defined, but several groups with competing interests could be lining up for review.

There are bills pending in both the US House and Senate to streamline federal processes.

“On the House side we should see the bill move through. It’s passed the lower chamber the last two congresses so I would anticipate it will get through this congress as well,” Caswell said. “On the Senate side we think there is more opportunity than in previous congresses. Senator Lisa Murkowski (R. Alaska) is a champion of this bill and with her in position as Chairman of the Energy and Resources Committee, she has more opportunity to promote moving this bill forward. When she held the last hearing on this bill there seemed to be wide support among the committee members present. We are hopeful of making progress in the Senate this time.”