As Stocks Fall, Chinese Growth Exposed as More Fragile Than it Looks

It’s no secret that China’s growth is slowing. Iron ore and copper prices are screaming reduced demand from the rooftops and China’s GDP figures have been gradually declining for the last few years.

Officially, the country is on track for 7% growth this year, stellar by most other countries’ standards, but in China’s case they have millions to lift out of comparative poverty and the lower the GDP growth, the less wealth generation there will be to achieve that aim. China’s per capita GDP is still a fraction of the US’ despite being the second-largest economy in the world.

Recent data from China’s National Bureau of Statistics (NBS), though, suggests growth may, in reality, be even slower than headline figures suggest, according to the FT this week.

Reviewing the first quarter numbers in more detail, the FT suggests the 7% growth figures the NBS is quoting are hiding a marked slowdown in investment and consumption. GDP growth is measured by three components the paper says – consumption, investment and net exports.

Net exports add to national expansion to the extent that the country exports more than it imports, but the contribution has traditionally been a very small part of China’s GDP number in spite of the country running a massive export-orientated economy for the last decade or more. Investment and consumption make up the majority of China’s GDP, for the whole of 2014 net exports contributed just 0.1% of the 7.4% growth reported for the year, already China’s slowest annual rate of expansion in a quarter-century.

Exports Up, Growth Actually Down

In the first quarter of this year, however, net exports contributed 1.3% of the headline 7% growth, while consumption and investment accounted for 4.5% and 1.2%, respectively. Without the boost from net exports, therefore, first-quarter growth would have been much lower — at about 5.7%.

Nor is the growth in net exports due to a strong export performance, it is due to a fall in import costs as commodity prices have slumped. First-quarter exports were up only 4.9% on the same period last year, but the collapse in global commodity prices meant that the value of China’s imports over the first three months of the year fell 17%, resulting in a large surplus. Unless commodity prices continue to fall in the second half of the year that contribution may disappear toward year end. 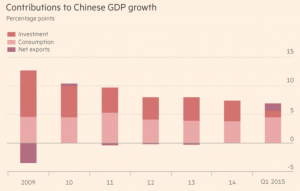 Beijing is aware of this. Interest rates have been cut four times since November in an effort to boost consumption and investment, but the collapse of an overheated stock-market is not helping the situation.

How to Fix Debt-Created Growth?

The Shanghai and Shenzhen stock exchanges, which have lost about 30% of their value since hitting seven-year highs last month, are looking increasingly vulnerable to further falls, adding to worries that Q2 growth may be even lower.

According to the FT, Chinese authorities have also instructed banks to continue to lend to infrastructure projects even if they might be insolvent and eased standards for local government bond issues — part of a larger plan to roll over some of the CNY 22 trillion ($3.5 trillion) in debt accumulated by local government finance vehicles.

With investors’ concerns very much focused on Greece in recent weeks, there hasn’t been a great deal of attention given to the deteriorating situation in China. Many investors have been betting on a stimulus package from Beijing to boost activity for the last twelve months, but so far it has not materialized and existing problems with excessive debt will probably dissuade the government from embarking on anything like we have seen in the past. When the focus on Greece subsides, investors will have a new cause for concern, expect Q2 to be worse than Q1 for China’s GDP.