Among the top three aerospace engine manufacturers in the world, ahead of Pratt & Witney but behind General Electric, Rolls Royce is the only viable major alternative to American dominance in the space.

Aircraft builders such as Boeing and Airbus, not to mention a number of smaller firms specify one of the three for all their large aircraft and many smaller models. The aircraft industry has been on a roll for years, driven by rapidly expanding global trade in Asia and the Middle East and high oil prices causing considerable pain for airlines in fuel costs. 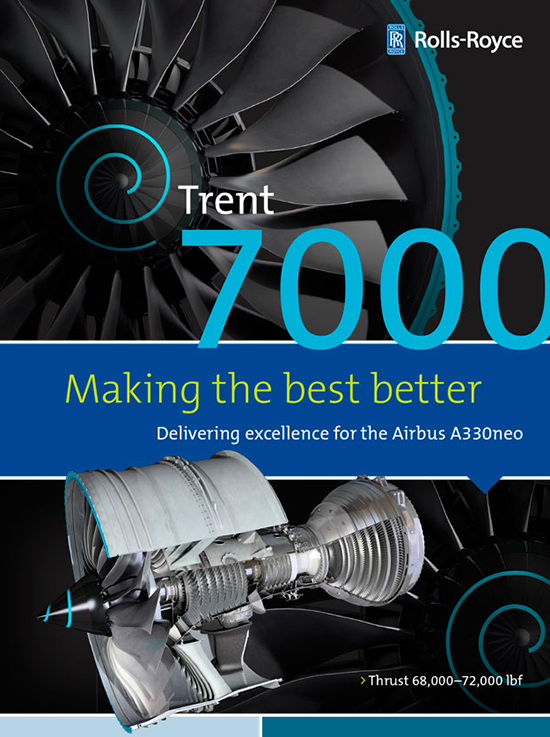 Rolls Royce is counting on sales of engines such as the Trent 7000 to move its business from maintenance-focused to new sales-focused. Infographic: Rolls Royce

Aircraft makers have enjoyed bumper order books stretching out into the next decade. As a result, one would think all is well with the engine manufacturers. Every plane needs engines, right?

Well, yes and no. Yes they all need engines and firms like Rolls make as much from service and maintenance as they do from selling new engines. Even more, probably. Yet timing is everything even in this business and Rolls has hit turbulence that has resulted in a fall in its share price and a third profit warning in 18 months.

Although Rolls is still predominantly an aircraft engine maker, the company makes about 70% of revenue and profit from the civilian and defense aerospace market, it also makes marine engines for supply vessels and power systems for oil rigs – a market that has tanked since the oil price collapsed and capital expenditures have been slashed.

Rolls’ main woes, though, have come from the aerospace side. According to the London Telegraph, the civil aviation industry is moving from fleets of smaller planes with less efficient engines (servicing and maintenance of which is highly cash-generative business for Rolls) to a new generation of larger planes with more efficient engines.

It has been estimated by analysts that cash and profits from engine contracts on the 747, 757 and 777 generation of jets will fall during the next two years. At the same time, the Telegraph says, the transition to new cash-flows from the delivery of the Trent 700 engine on the A330 are now lower than expected, as customers wait for the improved Trent 7000 engine to be fitted to the more fuel efficient A330neo, still a year or two away from production.

The company is also waiting for a ramp-up of the Trent XWB engines for the new A380 and A350 programs, both of which are behind schedule.

Rolls isn’t going to go bust by any means, but the firm’s cancellation of its share buyback program and its third profit warning has supported calls for the marine and aerospace sectors to be split. Or for the marine business to be sold off with some suggesting that would see up to a 20% increase in its share price in the event of a split or raise up to $6 billion if marine was sold, which short-term investors are hoping could be returned to shareholders.

Rolls’ problems probably mirror the rest of the engine makers. A full order book is not, in itself, a guarantee of consistently strong returns. Projects wax and wain, and if external pressures such as oil prices hasten the end of one contract before the next is ready to take off, suppliers suffer.

There will likely be something of a knock-on effect for material suppliers. Tier ones, of course, usually have good visibility into their principals’ programs. Those further down the food chain are sometimes not so lucky.