Home | Commodities | With Natural Gas Passing Coal in Market Share, EPA May Still Get What it Wants
Commentary

With Natural Gas Passing Coal in Market Share, EPA May Still Get What it Wants

A quiet revolution is going on in the US power generation market, and it may be giving a lesson for those countries dithering over whether to allow hydraulic fracturing (fracking) of oil and natural gas deposits identified but not yet proven.

According to the FT, April was the first month in US history that gas-fired electricity generation surpassed coal-fired generation, (although it came close in 2012 when gas prices were also very weak). By comparison, in 2010 coal provided 45% of US power. In April of this year 31% of US electricity was generated by natural gas compared to 30% for coal, and the trend continues.

In gigawatt terms, wind power is growing even faster than natural gas, flattening the latter in the league tables. US coal capacity dropped by about 3.3 GW during 2014, and the US Energy Information Association predicts it will shrink by a further 12.9 GW this year, while wind power capacity rose by 9.8 GW and gas by 4.3 GW. 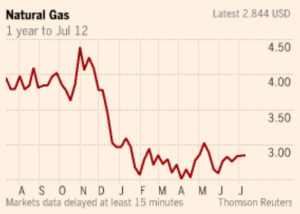 The reasons are more complex than simply low natural gas prices, although that, undoubtedly, is a major factor. The Environmental Protection Agency’s failed attempt to force environmental compliance by the back door this year encouraged some coal-fired utilities to see the writing on the wall and either mothball plants or invest in new technology to accommodate the mercury emission and other pollution targets, raising costs.

Brett Blankenship of Wood Mackenzie is quoted by the FT as saying, “low gas prices mean coal plants are running less, and when they run their margins are typically compressed. So companies find it difficult to make the investments needed to comply with regulations and keep those plants running.”

It’s a vicious downward spiral in the face of lower-priced and less-polluting competitor fuels. Although natural gas makes a better swing fuel source to balance wind and solar renewables variability, not all utilities are blessed with an abundance of such spare generating capacity so they rely on their coal power plants to step in at times of peak demand. Unfortunately, running a coal plant at anything other than full or near-full load on a continuous basis brings per-gigawatt operating costs up AND per-gigawatt emissions of pollutants.

Not surprisingly, coal producers share prices have fared even worse than shale gas companies. Peabody Energy’s share price, the largest US coal producer, has fallen 98% since April 2011, while those of Arch Coal have dropped 99.2% and of Alpha Natural Resources by 99.6%, while their debt is so devalued it is yielding 17.9% for Peabody suggesting investors are expecting default.

With natural gas prices set to stay low for some years to come and renewable costs falling steadily the writing is on the wall for all but the latest and most efficient coal-powered electricity production. At least the environmental lobby will be pleased and the EPA may have achieved much of what it set out to do, Supreme Court slap down or not.