Usually, articles about the share price of specific companies bear some kind of footnote concerning the authors own exposure to the shares, whether they are a direct investor or via a fund, in the company in question.

I can say, with some relief, that I am not, to my knowledge and fervent hope, an investor in BHP Billiton nor, at least in the short term, am I likely to be in the mining sector as a whole. I would accept there is an argument that some commodities could have hit bottom. If I was a betting man I might permit a small punt, but I am not and I won’t.

Mick Davis looks like he may make a contrarian bet and buy Rio Tinto Group’s Australian coal business but that may have as much to do with the fact he has been sitting on a cash pile of investors’ money burning a hole in his pocket than coal is suddenly a great bet, even at these depressed asset prices.

Having spun off a chunk of mining assets under the trendy sounding name of South32 earlier this year, BHP probably hoped the worst of its write downs was behind it. South32 is a collection of alumina, aluminum, coal, manganese, nickel, silver, lead and zinc assets formerly known as Billiton. No one wanted the post-merger assets and BHP — formerly known as the Broken Hill Proprietary Company Ltd. — couldn’t sell them, so the firm wrapped them up into a bundle and gave them to their shareholders. Since May, the share price of South32 has, well… gone south. There’s no doubt BHP knew it would, but at least it got them off the company’s books. 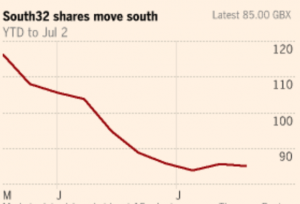 Not that BHP is alone, even the strategically savvy and fleet of foot Glencore PLC had trouble finding a buyer for its shares in platinum miner Lonmin and ended up doing the same thing, giving those shares to shareholders. Glencore is well shot of it, according to an FT report, the share price has collapsed from £40 each in 2007 to £1.08 today.

Back to BHP, though. Like its competitor, Rio, BHP has a history of buying assets at the wrong time or for the wrong reasons. Bigger isn’t always better and timing is everything. BHP moved into US shale gas too late only to see the price collapse. In 2011 the firm bought US gas operator Petrohawk for $12 billion only to take a $2.84 billion hit writing down goodwill as the value fell. The Telegraph reports the firm has taken a further $2 billion on its Hawkville gas project in Texas as geology complexity slows and complicates the development of the field.

What Does This Mean for Gas, Oil and Metal Buyers?

BHP, Rio and the rest of the major miners are big enough to weather the storm of low commodity prices, but with little on the horizon to suggest commodity prices are likely to rise significantly in the medium term and evidence that some may have further to fall, the companies dividend policies are going to come under pressure. A PriceWaterhouseCoopers report on the industry, covered by the FT, says their policy of borrowing money to pay consistent levels of dividends on their shares is unsustainable.

Dividends paid by the top 40 miners in 2014 consumed all their available cash, reducing their balance sheet flexibility in continuing tough times. Capex has been cut, for the top 40 by 20% in 2014, and exploration budgets fell to $4.9 billion last year, half the level of just two years ago. The maxim that today’s shortage is tomorrow’s glut is writ large in the minds of mining executives, but with investment falling so markedly we can be sure as the decade unfolds the reverse will become true. Whether the current crop of executives will be around to see it is another matter.