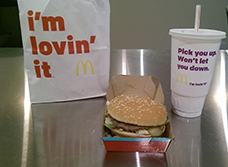 The Big Mac index of currencies was created, somewhat tongue in cheek, back in 1986 in an effort to illustrate the extent to which a currency was at or diverged from its correct value.

The Economist modestly puts parentheses around the word correct in an article this week introducing a beefed up version (unlike the article we will leave the Burger puns there) of the old index which seeks to create more finely nuanced price comparisons, taking into account the relationship between GDP of the country as a totem for local wages and the price of a Big Mac.

As the Economist says, the old model is based on the theory of purchasing-power parity (PPP), the notion that, in the long run, exchange rates should move towards the rate that would equalize the prices of an identical basket of goods and services (in this case, a burger) in any two countries. So the index should highlight which currencies are over or undervalued, and hence which direction we can expect them to go over time.

The new index tries to account for the entirely reasonable argument that we would expect a product, in this case a Big Mac, to be cheaper in poorer countries because wages will be lower. The Economist uses the relationship between prices and GDP per person to create a set of adjusted results and, of course, the data is displayed in a series of graphs based on any one of five currencies – the US dollar, Euro, Japanese yen, GBP sterling and Chinese yuan, allowing the user to see to what extent the index believes the local currency is over or undervalued to these five.

What’s Going on in Venezuela?

Pity those at the bottom of the scale; Venezuela, Ukraine, India, Russia, Malaysia, South Africa and Egypt. If the index is right, their currencies have a huge potential on the upside. Of course, it isn’t quite that simple or every currency speculator in the world would be using the index to trade on sure fire medium-term bets.

Many of those at the bottom of the chart have profound economic problems impacting their exchange rates, countries like mismanaged Venezuela, Ukraine and South Africa or sanctioned Russia, but, all the same, the charts make interesting reading, and in an area of study – economics – that some would argue is at best a pseudo science, who’s to say the Big Mac index is any worse than any other measure?

PREVIOUS POST:
POSCO Finally Throws in the Towel on Its India Steel Venture, a ‘Lost Cause,’ Indeed
NEXT POST:
SMU Steel Summit 2015: The Destination for Metals Industry Professionals this Year