Back to Supply and Demand Fundamentals as Metal Price Correlation Fades

An interesting if short article in the Financial Times reviewing research carried out by a team at Bank of America Merrill Lynch illustrates something those in the metals markets will have been subliminally aware of but may be not have focused on unless they were truly cross-metals active.

In recent weeks there has been wholesale weakness across all the metals in the face of fear over global demand, particularly Chinese demand, and concerns about when, not if, the Federal Reserve will raise rates and the impact that will have on the US dollar. A stronger dollar is invariably a harbinger of weaker metals prices as it raises the cost of metals in foreign currencies by virtue of exchange rate, not demand. 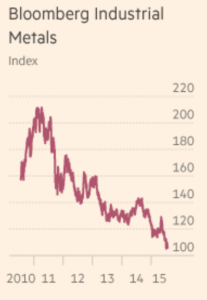 Source: Bloomberg, re-printed in the FT

In the period prior to the financial crash, links between metals were tighter. The analysis said, “Correlations between metals’ prices were high ahead of the Great Financial Crisis (GFC) and in the immediate aftermath of it. Prior to the GFC, this was heavily influenced by exceptionally strong global economic growth and Chinese demand. Immediately after the GFC, cross-asset correlations remained high, partially because several governments implemented large fiscal stimulus packages and many central banks flooded the markets with liquidity.”

But since the post-crash period, say from 2013 onwards, metal prices have been relatively driven more by their fundamentals. In the last twelve months copper’s correlation with gold is down 11.9%, the bank estimates, and the copper’s relationship with aluminum is 17.8% weaker. Only precious metals have increased, with gold and silver rising from 78.8% over the past 10 years to 81.4% in the last year.

The trend among base metals is a reflection of the lack of demand and rising surpluses. As investor demand has weakened, supply and demand fundamentals have been allowed to take on more of a role in price determination. A trend that is likely continue for the next two years, as surpluses remain and global demand is muted by lower Chinese demand.