What Putin Hath Wrought: Russian Economy Caught in the Consequences of a Commodities Curse

Under Vladimir Putin, Russia bet its future on its abundant natural resources, believing it was irreplaceable as an energy source to the economies of Western Europe.

Russia pumped oil and gas, nickel, aluminum and other commodities at the expense of building its manufacturing base. With few exceptions, manufacturing suffered at the alter of a strong ruble and, for a time, was flattered by a strong domestic economy playing catch up after years of Soviet waste. The following graph of real effective exchange rate against exports of non-oil goods shows how the strength of currency correlates with falling exports of manufactured goods. 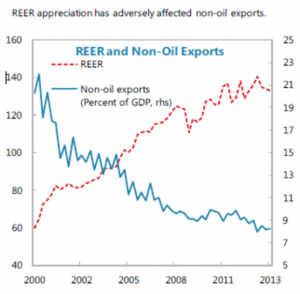 But now, a combination of falling commodity prices, particularly oil and gas, and western sanctions following Russia’s misadventure in Ukraine in 2014, have left the economy in a state of decline. According to the London Telegraph Russia is running a budget deficit of 3.7% which may not sound like much, but for an economy without developed capital markets it shouldn’t be running a deficit at all according to sources quoted by the paper.

Nor is it just central government, a report by the Higher School of Economics in Moscow warned that a quarter of Russia’s 83 regions are effectively in default as they struggle to cope with salary increases and welfare costs dumped on them by President Vladimir Putin before his election in 2012.

“The regions in the far east are basically bankrupt,” the bank Unicredit is quoted as saying. The central bank is burning through foreign exchange reserves initially in a wasted attempt to support the ruble, which has now been allowed to free fall, but the authorities are continuing to support companies having to roll over foreign currency debt as it comes due. 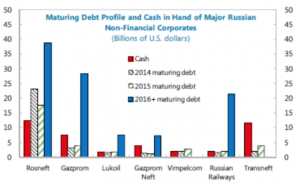 Some $86 billion in outstanding debt is coming due this year and supporting that has contributed to a reduction in official reserves from $524 billion in 2014 to an estimated $340 billion today when various commitments are stripped out.

The economy has contracted by 4.9% over the past year and, as oil prices resuming their bear market trend, this is likely to worsen. Half of Russia’s tax income comes from oil and gas, yet output from Gazprom has fallen by 19% this year while revenue is likely to fall by almost a third to $106 billion in the face of falling demand and lower prices. Core inflation is running at 16.7% and real incomes have fallen by 8.4% over the past year, by comparison a far deeper cut to living standards than occurred following the Lehman Brothers crisis. 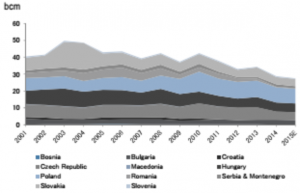 Gazprom alone generates a tenth of Russian GDP and a fifth of all budget revenues, the paper reports. Oil is an even bigger worry. In volume terms, the spigots are wide open and Russia is pumping nearly 10.7 million barrels per day with the help of a new tax regime but even Lukoil’s vice-president, Leonid Fedun, said in March that Russia’s oil output could fall 8% by the end of next year, taking 800,000 barrels per day out of global markets as a lack of investment fails to reverse the depletion of old soviet era wells.

Normally that would be enough to rally oil prices, but with Iran about to add twice that to an already over-supplied market the result will likely be lower prices and lower revenue for the Russian economy for years to come.

It is hard to see what the answer is for Russia, with so many of the country’s assets in the hands of so few individuals close to the president, the model is unlikely to change anytime soon. A desperate Russia is potentially a more dangerous Russia and with power in the hands of a small clique it is hard to predict how it will react as the screws of the global commodity market tighten. But, having worshiped at the alter of commodities for virtually all his presidency, Mr. Putin in unlikely to change or be able to change religion in time to avert a more serious deterioration of the Russian economy in the months and years ahead.

PREVIOUS POST:
Who Says Metal Price Correlation Is Fading? Why Metal Prices Will Always Have Some Connection
NEXT POST:
EPA Clean Power Plan Final Rule: 3 Glimmers of Hope for US Manufacturers