Home | Automotive | Is the Chinese Automotive Market Maturing? Or Simply Going Into Another Slump?
Commentary

Is the Chinese Automotive Market Maturing? Or Simply Going Into Another Slump?

Concern in China is rising that June’s 3.4% fall in auto sales, compared to the year before, could be the start of a trend. After two years of consistent growth and high capacity utilization the world’s largest car market is showing signs of fragility.

Data from the China Association of Automobile Manufacturers quoted in the Financial Times suggests China’s automotive market may be maturing after years of breakneck growth.

Foreign firms have been hardest hit. Volkswagen and BMW have reported falling sales and increased pressure from distributors for discounts. Chinese brands, by contrast, have fared a little better after four years of consecutive annual decline relative to overseas brands. The Japanese are also back in the mix having rebounded after two years in which anything Japanese suffered as a result of territorial disputes and political tensions.

Even the Japanese, though, are sounding words of caution, “There’s excessive competition and automakers are building excess capacity, and to raise utilization of the plants, they will engage in excessive selling,” Fumihiko Ike, chairman of the Japan Automobile Manufacturers Association, gave warning of last week according to a Bloomberg report.

The average level of capacity utilization across international auto brands in China has fallen to 94.3% in the first half of this year, dropping significantly below the 100% level they have been accustomed to and underlying Mr Ike’s comments. 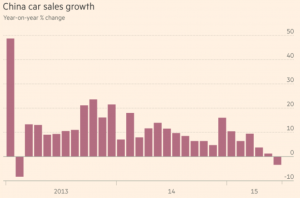 Analysts at Barclays recently revised their 2015 outlook for passenger car sales growth sharply downward, from 8.5% to 1.7%, but after higher growth in the first half that suggests a flat second half with little prospect of conditions improving to encourage higher growth in 2016.

What This Means to Western Automakers

Traditionally, automakers have enjoyed higher margins on their sales to China compared with established markets such as Europe. Indeed, western brands have seen strong dividend streams on their Chinese joint ventures, which could be about to reverse in 2016.

VW has earned an almost eightfold increase in the annual dividend it receives from its Chinese joint ventures over the past five years, from €400 million in 2009 to €3 billion last year. With Chinese brands gaining ground and the Japanese manufacturers back in favor, US and European automakers could see the going get tougher later this year and next.