Are Nickel Prices Ready For A Turnaround? HSBC Thinks So

Rising London Metal Exchange nickel inventories have been taken as a bearish sign for the future path of refined nickel prices, while appearing to run counter to the long running narrative that says the Indonesian export ban introduced in early 2014 will eventually lead to a shortage of nickel ore for Chinese nickel-pig iron production and, hence, upward pressure on prices.

From a fundamentals point of view, nickel has been giving confusing messages of late and views vary widely on future price direction.

HSBC, for example, in its most recent Metals & Mining Quarterly Review forecast just last month said there would be a 53,000-metric ton deficit in the nickel market this year and prices would average $15,120 per mt this year. They are currently at $10,800 at the time of this writing. As a consequence of HSBC’s constrained supply side view, they are predicting $21,500 per mt in 2016 and $22,000 per ton in 2017. 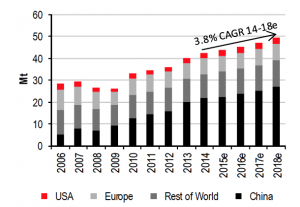 A large part of the bank’s argument seems to be based on its belief that global stainless steel output will grow at a CAGR of 3.8% during 2014-18, admittedly considerably lower than the 6.5% CAGR during 2010-14, but still a hefty bet on China where concerns are growing about how robustly stainless output can continue to rise.

In China, stainless steel growth has fallen dramatically from 8.3% in 2014. This year it is expected to be closer to 3.5% according to HSBC but with producers’ margins under pressure and a rising tide of protectionist action against Chinese stainless imports, even this may be optimistic.

Right now, mills are down for maintenance so output has slackened but there is a still a pipeline of new capacity that will heap pressure on older producers to shut capacity in the face of a potential glut.

Stockpiles Falling, But Still There

On the supply side, the Indonesian export ban has not resulted in a shortage of nickel. Chinese mills had amassed some 18.9 million mt of Indonesian nickel ore at ports in February 2014 according to FastMarkets. This has dwindled since and stood at some 3.7 mmt as of the end of May, down from 6.4 mmt at the beginning of the year. If that rate continues, they will run out later this year. Ore supply generally, though, is still plentiful as it has been supplemented by supplies from the Philippines as this graph shows. 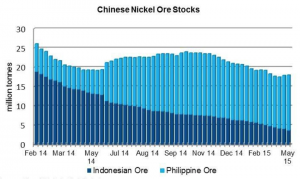 But, on the plus side for refined producers, the fall in nickel prices is reportedly making NPI production uneconomic, anyway, and encouraging stainless mills to switch to class-2 nickel products such as ferro nickel.

Import figures support this. Nickel ore imports by China are off 47% in the first five months of the year, but ferro-nickel imports have jumped 111% to 258,636 mt, mainly from New Caledonia. At some point, nickel producers hope primary nickel will get sucked in, too, at which point a sustained draw-down on the substantial LME and Shanghai Futures Exchange stocks may take place.

At the moment, while refined imports are up, there is no firm evidence the slight trend reversal of rising LME stocks is the start of a long-term decline: 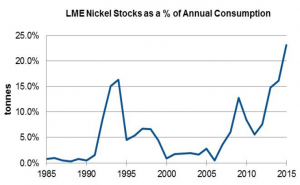 The main beneficiary of a switch to primary nickel would, in the short term, likely be the Russian producer OAO Norilsk Nickel. Their brand recently qualified for good delivery under LME rules and the producer is desperate for export markets. Refined producers hoping for the kind of sustained recovery envisaged by HSBC, though, are likely to be disappointed.

What This Means for Nickel Buyers

The pressure is on Chinese stainless producers to curb production and, although recent purchasing managers’ index data is encouraging for the US and Europe, growth there is unlikely to exceed the drop in Chinese demand. With large inventory of nickel ore, of refined metal on exchanges and adequate supply of ferro nickel there doesn’t appear to be a strong argument for nickel prices to rise anytime soon.