Depositors may be looking forward to an increase in Federal Reserve interest rates  and the commodity bulls may be fearing it, but what about all those emerging markets that are a.) heavily exposed to commodities as their principal export and b.) heavily exposed to overseas borrowings in US dollars. For them, the fall in commodity prices has been dramatic and damaging while the rise in the US dollar has started to increase debt repayments just when they can least afford it.

Brazil and Russia are prime examples; the Brazilian real and Russian ruble have both taken a hammering as iron ore and oil, respectively, have dropped to their lowest levels since just after the financial crisis. Both economies are in recession and with the Fed set to raise rates, which will bolster the US dollar even more, debt repayments will rise while depressing commodities further.

Asia on the Brink

The Economist explores the position of Asian emerging economies like Indonesia and Malaysia, saying that four years ago a dollar fetched just over 8,500 Indonesian rupiah, and just under three Malaysian ringgit. Today, a dollar is worth nearly 14,000 rupiah and almost four ringgits. Both currencies hit 17-year lows this summer, and are still falling as this graph from the Economist illustrates. 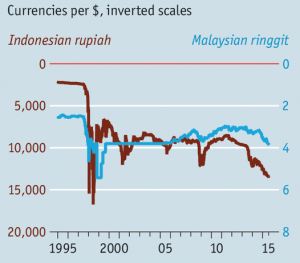 This could see their currencies back to the level of the Asian crisis in the late 1990’s, and they’re not alone. The rupiah and ringgit have fallen this year, by 8.4% and 9.8% against the dollar respectively but the Thai baht is also down 6.4% and so is the Philippine peso, although so far by only 2.2%, supported by repatriation of foreign earnings.

Hopes that lower oil prices will reduce import bills have not translated through into improved currency flows and better balance of payments. Exports, particularly within the Asian region, are depressed by a slowing China, and the fact that many Asian economies are also large commodity producers, has made them very vulnerable to falling raw material costs. Indonesia is a net oil importer but a large exporter of ores and refined metals. Malaysia, by contrast, is a significant oil exporter and has seen the value of its exports fall steadily in recent months with the prospect of further falls in the second half of the year.

When the Fed raises rates, probably in September, the increases will be gradual but even half a percent will be a significant rise on near zero rates that we have been used to for the last few years. September won’t be the last, though, and subsequent rate rises will add pressure on some more resource-exposed emerging markets with significant debt burdens, likely exacerbating pressure on their exchange rates and possibly prompting exchange controls.

Buyers overly reliant on such markets could take the time now to review their exposure and weigh the likely risks such developments could pose for their supply chains. According to Goldman Sachs, commodity prices are likely to remain depressed for 2-3 years and the US dollar only has one way to go relative to most rest-of-world currencies with Fed interest rate increases a near certainty. So, the trends are clear. What effect that will have on suppliers currencies and financial positions remains to be seen, but one thing is for sure: for some it will not be business as usual.

PREVIOUS POST:
Week In Review: How Low Can Metals Go? Or Oil? Or The Chinese Yuan?
NEXT POST:
Allegheny Technologies Inc. Locks Out Union Steel Workers