US Ramps Up Oil Exports… But Only to Mexico

The US is taking its first tentative steps toward exporting oil.

No, Congress has not approved large-scale oil exports, it is not about to repeal the 1975 export ban brought in after the early ’70s OPEC inspired oil crisis. Congress is split with republicans broadly supporting a lifting of the ban but democrats against it, keen to limit further fracking on environmental grounds, according to the Financial Times. The Obama administration has, instead, given the okay to limited exports to Mexico.

Why No Blanket Repeal of the Oil Export Ban?

More to the point, neither party wants to be accused down the line, as oil prices inevitably recover, of being responsible for reduced domestic supply as the cause of higher prices. Most economists, though, suggest increased exports would lower global prices and, as a result, would mean lower domestic prices, but of course no one knows until a large-scale lifting of the ban is agreed to.

Meanwhile,the US can legally export to Canada, the only country to whom export rules do not apply. The US already shares hockey, Seth Rogen and country/western music with Canada, after all, so why not oil?

The US exported a record 586,000 barrels of crude a day in April to Canada according to Bloomberg. This was light grades needed by Canadian refineries to blend with high-viscosity heavy tar sands or for locations where US supplies are closer to a Canadian refinery than Canada’s own reserves.

Nor should exports to Mexico be seen in the light of falling Mexican production, although production has been in decline for a decade there, Pemex still exported 803,000 barrels a day of mostly heavy oil to the US last year. Here’s the issue: Mexico imports about half its gasoline as it struggles to produce gasoline from its heavy crude. Pemex mostly makes fuel oil, which is a polluting low-value product and is forced to import lighter products such as gasoline. By Mixing US shale oil light crude with its own heavier oil, Pemex says it will be able to produce more gasoline.

The export of US crude requires an equivalent quantity of heavy Mexican crude to be imported, but US refineries are capable of handling this product. Some, such as BP’s Whiting Refinery in Indiana which recently closed for emergency repairs, have been upgraded at a cost of millions to handle Canadian Tar Sand crude.

The Mexican deal allows up to 100,000 barrels a day of light oil and condensate to be exchanged for heavy Mexican crude. For the shale industry, it is a start and could set the stage for further exports via strategic deals rather than a wholesale lifting of the ban, seen as unlikely in the medium term. The amount involved is too small to lift prices, which have fallen heavily this year as this graph from the FT shows. 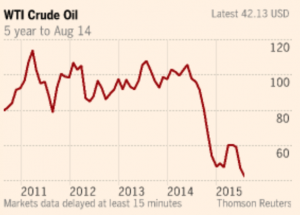 But if further deals were to follow, economists’ expectation that it would lead to lower global, and therefore lower US prices, could be put to the test. It may be that politicians’ only greater desire, to protect their own record from criticism, will prevent US consumers from every finding out if they are right.