Following our recent article on the seaborne iron ore market, some may assume the landlocked domestic contract supply market for iron ore and pellets is immune from the volatility found in Asia.

To some extent that’s true, there isn’t a spot or futures market in the same way as we see in Asia, but the market is far from immune to global prices and prices have fallen in North America as they have elsewhere. 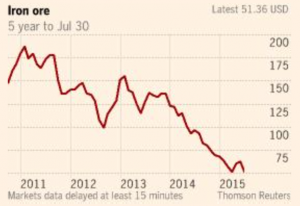 Essar Steel is said by the Financial Times to be ramping up construction on a $1.9 billion mining and processing facility, with a planned completion in the second quarter of 2016. It will be one of the largest construction projects in North America by capital expenditure according to the paper and Essar hopes to produce 7 million metric tons annually of high-grade iron ore pellets for 70-80 years from the resource.

Why Iron Ore? Why Now?

With Iron ore prices plunging you may ask what would possess them to embark on such a venture, but Essar would say they expect the price to come back and indeed have made much of their expectation that the US will see rising steel demand, particularly for the high-grade steel used in automobiles and advanced manufacturing.

Madhu Vuppuluri, chief executive of Essar Steel is quoted as saying “Due to the infrastructure revival that is likely to take place here in North America, the US and Canadian steel industry will remain robust moving forward.”

In 2013, the American Society of Civil Engineers estimated that $3.6 trillion in investment was needed by 2020 to return US infrastructure to its optimal state but whether any of that expenditure will be made is another matter. Robust state is also an interesting turn of phrase. North American steel producers would be more likely to say they are in a pitched battle against a flood of imports. US steel mills have had to lay off workers as cheap imports have undermined domestic production. 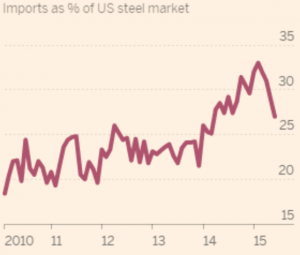 Imports have stabilized. If averaged over the first half of the year, they are up some months and down others, but in a falling market the percentage they take is probably less of an issue than the depressing impact they have on domestic prices.

Expanding From a Position of Weakness

Essar is not exactly in a rock steady place financially, either. their Canadian steelmaking operation recently emerged from bankruptcy protection and their Indian parent has had to sell a 49% stake in its main oil refinery to Russia’s Rosneft to pay down debt.

Such a project, though, will be measured over the longer term. The price has time to recover before pellets are ready for delivery later next year but, as the FT concluded in a closing comment from Tony Barrett an economics professor at the College of St Scholastica in Duluth, Minnesota and an expert on the local mining industry, who said “Essar couldn’t have timed this worse. You just have to ask yourself, ‘is this going to make money over the next 30 years?’”