Week-In-Review: The Market Rebound, Not So Fast, Oil!

After the market tumult of last week, many expected things to calm down and that China’s stock market would finally calibrate to the new, devalued yuan/renminbi while equity markets elsewhere would bounce back from Friday’s big sell. Heck, maybe even the beleaguered commodity markets might recover some of their losses, right?

Wrong. Oil reentered a bear market on Tuesday extending the previous day’s losses, when Brent crude — the international benchmark — recorded its biggest one-day sell-off since February. After dropping more than 6% on Monday, Brent fell a further 2% in the next trading session to $55.40 a barrel. It is down more than a fifth from its year-high of $69.63 a barrel reached during intraday trading in May.

Not the Oil That Made Jed Clampett Rich

Not such a good time for oil companies but, at the very least, gas prices are down here in the US and costs for everything from construction to automobile production is down, too, right, so we must be on to step three, profit, right? Oh no, not even close. Construction material prices are down, but new construction spending isn’t exactly picking up, either. Not here and not in China, where lack of demand has led lead and zinc to five-year lows. 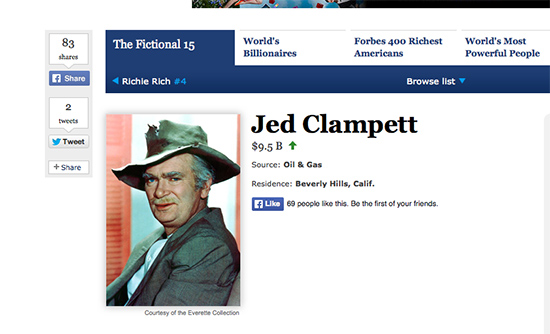 Jed Clampett made $9.5 billion in oil and gas. That likely would not have happened with today’s prices.

Incidentally, Forbes estimated Jed’s net worth at $9.5 billion, 4th on its “Fictional 15” list. That’s more than weapons tycoon Tony Stark (#6). Not bad for wealth based entirely on oil and gas discovered while hunting possums.

A Rebound in Stocks… Of Sorts

The Dow Jones Industrial Average has been back in positive territory, though, saving our collective retirements and paring the losses we saw last week. The Dow gained 369 points yesterday, alone, curbing the big losses from Friday and Monday. It’ll surely last, right? Ummm, no promises. While our own Stuart Burns acknowledged the rebound in western markets, he also cautioned that aftershocks from China’s economic crisis could be forthcoming.

“With (Chinese) GDP growth widely believed to be lower than the official government number of 7% it is hard to see how domestic consumption can pick up as households lick their wounds,” Burns wrote.

So, in short, expect more volatility as China spares the rod of economic depression while spoiling the child with purposely devalued currency.

What Does This Mean for US Buyers?

Expect to pay less for Chinese steel. We know, it’s already dirt cheap as foreign imports were up 5% in July. The job of policing foreign dumping into the US market just got tougher.