Once masters of the universe, or at least the commodities universe, major traders like Noble Group and Glencore PLC are now suffering from the fall in commodity prices. In theory, a trader could make money in a rising or falling market protecting their position in a bear market by hedging their exposure, but in practice some elements of the price can be hedged and some cannot.

According to the Financial Times, Noble Group’s profits before interest and tax in its metals and mining segment fell 98% in the first half of the year; particularly hurt, the newspaper says, by the collapse in physical delivery premiums causing massive write downs on aluminum positions. In the US, the Midwest Premium is down 67% this year, an unhedgeable exposure position takers in the industry have had to take on the chin.

Premiums Fall, So Do Profits

In Europe, the premiums are trading near levels last seen in 2010, barely above $100 per metric ton. While in Japan, premiums for third-quarter shipments were agreed at around $100 per mt, compared with $425 in the first three months of the year.

The FT quotes a trader saying, “It’s a pretty nasty drop. What happens is, all the big boys have gotten crushed. They’re sitting on stock which then becomes worth a lot less, so you’ve got to mark it down.”

Why the delivery premiums fell so far and so fast is eloquently summed up in an article by Reuters’ Andy Home some weeks ago. The collapse has all the hallmarks of a collapsing bubble and, like most bubbles, wasn’t sparked by one event but several impacting in parallel. 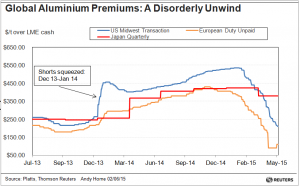 Meanwhile, that once lucrative stock and finance trade – the cause directly or indirectly of the load-out queues and high premiums – has become less attractive. As recently as 2013, the LME curve structure could generate a gross rate of return of up to 12% for holding aluminum for 15 months, according to Home.

That’s a mouth-watering return in a near-zero interest rate environment. But as the contango collapsed, that delta between spot and 15 months evaporated and the trade dried up. Metal that was soaked up in the tens of thousands of ton lots was suddenly no longer in demand and available to the market. As a result, premiums collapsed. 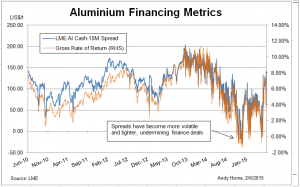 As this graph shows, the physical delivery premium peaked when the spot-to-15-month spread was highest and collapsed with the contango to its current position.

Opportunity With Falls In Premiums

The severe writes downs in the traders’ fortunes is in part a reflection of these heavy premium falls. Of course revenues are down on falling prices and demand is soft although 4-5% growth today in China is, in volume terms, still the equivalent of 12%+ back in 2006-7, so real demand hasn’t collapsed.

As we wrote recently, though, China’s own production in some commodities has been on the rise and, as a result, Chinese imports are down while GDP growth has remained positive. That, too, will have impacted traders earnings as China has been the engine of commodity demand behind which most miners, traders and processors have been firmly hitched.

Once these falls in prices and premiums are behind us, after the market has bottomed, traders’ margins should improve. Most analysts are putting a sell recommendation on the likes of Glencore, which sounds a bit like shutting the barn door after the horse has bolted. The brave may be watching more closely for the time to buy.