Home | Macroeconomics | Is India Really About To Overtake China In Economic Growth?
Commentary

Is India Really About To Overtake China In Economic Growth?

Possibly, if you listen to Indian politicians and senior business leaders. In a recent FT article Arun Jaitley, India’s finance minister, said in an interview with the BBC: “An economy which can grow at 8 to 9% like India certainly has viable shoulders to provide support to the global economy.”

Officially, Chinese economic growth will be 7% this year, but with industrial growth weak and consumer demand held back by stock market falls, it could quickly head towards 5% or below in the second half. India, meanwhile, is expected to expand at 7.7% according to the country’s official measure. A separate Financial Times article reported that New Delhi comments that India’s economy in the June quarter grew 7%, year-on-year, exactly the same as in China.

That, the article suggested, means that India is overtaking China in terms of growth and is poised to become the world’s fastest expanding large economy. Certainly it’s true that as the world’s third-largest oil importer India has benefited from the collapse in oil prices, both in terms of improving its balance of payments and reducing inflation.

Nor is India a big exporter of manufactured goods, not normally an advantage except in times of weak global demand when the greater reliance of the economy on internal consumption insulates it from weak external demand. 57% Of Indian’s GDP comes from household consumption. 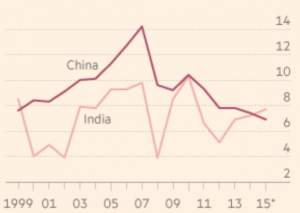 However, before we get too drawn in by the hype both articles also point out the headwinds Narendra Modi’s India faces. His government has failed to implement much-needed economic reforms, in spite of hope when he came to power that he would sweep away the creaking political machine that has held India back for so many decades.

Land reform is needed to make it easier to buy land for industry, housing and roads. While the upper house blocked attempts to introduce a goods and services tax that would allow India to operate as a single market, replacing a plethora of complex state fees and taxes.

Nor is business happy. Investment is drying up, only foreign direct investment is still doing well, but that is a reflection of poor alternatives elsewhere. India is the least bad rather than a shining light in its own right. 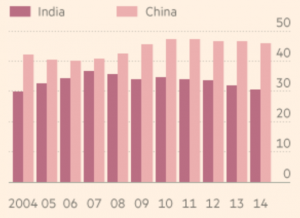 How to Count ‘Growth?’

That growth figure should also be viewed with some skepticism. Last February, India changed the way it calculated GDP, adding more than 2 percentage points to its headline growth rate. On the old measure, India is still limping along at a far from impressive 5%, the FT says.

India’s GDP growth aside, the economy is still small relative to China. India’s output is one-fifth that of China’s. India makes up a mere 2.5% of global GDP against a hefty 13.5% for China. If China grew at 5% annually, it would add an Indian-sized economy to its output in less than four years according to the FT. To suggest it is going to rival China is a far stretch of the imagination, even at 4-5% growth China is still pulling away from India. Indians are a proud people and indeed have much to be proud about, but the recent hubris in comparing the Indian economy with China’s turns a blind eye to many challenges that India faces and so far has shown no appetite to overcome.