The UK Steel Industry: Anatomy Of A Decline Aided By Imports

If anyone in the US should ever accuse the steel industry of overreacting to the threat of imports and excessive domestic costs, they need only take a look at the UK.

In the face of struggling domestic demand, the UK has gradually ramped up domestic costs for electricity to large industrial users like steel producers, piled environmental restrictions on plants and allowed cheap imports from places such as China to come largely unhindered into the market.

The result is most, if not all, of the UK steel industry is losing money and has done so for a number of years. According to a Telegraph article losses at Tata’s UK operations – the largest in the country – doubled last year to a staggering £768 million ($1.2 billion), while revenue and production fell.

Tata Steel has been struggling ever since it became the UK’s largest steel producer in 2007 with its $13 billion takeover of Anglo Dutch producer Corus, a deal that it must now deeply regret. In an effort to stay afloat, the company has continually slashed jobs and scaled back operations, reducing its European workforce from 25,000 to 17,000 in the process.

Tata has announced a further 700 job losses in Yorkshire and plans to mothball a plant in South Wales which will account for several hundred more job cuts. But even more dire is the state of Europe’s second-largest blast furnace at Redcar in Yorkshire. Sahaviriya Steel Industries, the Thai company that purchased Redcar in 2012 has reportedly already lost $1 billion of its own money propping the operation up and racked up debts of a further billion.

Now it looks like closure is just a matter of days away with the loss of some 2,000 direct jobs and a further 1,000 contractors as slab prices have plummeted from $500 to $300 per metric ton in the last year.

The UK steel industry has been in decline for decades, much like the rest of Europe’s steelmakers as the market has matured and lower-cost producers have sprung up around the world. But in recent years, the pressure has become acute due to a number of factors. First, electricity and power costs in the form of natural gas have risen sharply 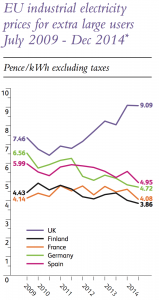 Electricity costs in particular are as much a result of the UK government’s switch to renewables with subsidy costs pushed onto consumers, as it is due to world energy prices.

Threat of Exported US LNG

Compare the UK and Europe’s natural gas costs to those of the USA to see the burden European steel producers face in trying to compete internationally, and then ask yourself: a.) what would happen if the US exported LNG en masse causing domestic prices to rise and b.) how can French and German steel producers sell into the US and undercut US domestic producers when they face a cost base like this? 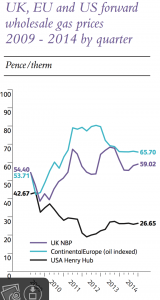 Although UK steelmakers had managed to offset declining domestic demand by improving exports in recent years, aided by a relatively weak pound compared to the Euro, that has now reversed as the Euro has fallen just as Asian producers have flooded the European market.

Chinese steel exports have been growing at a rate of around 53% a year while Chinese imports into the UK have risen from 2% of UK steel demand in 2011 to 8% this year and rising. Even China’s own industry body, the China Iron and Steel Association (CISA), has acknowledged the problem urging members to refrain from selling overseas at below cost and saying exports are not the way to resolve overcapacity in the home market.

Ignore domestic steel producers health at your own risk. In the UK we may not have a steel industry in 5 to 10 years. The industry is already almost completely foreign-owned. At some point it may also be foreign supplied.