Car shares aren’t the only commodity to fall out of favor following the revelations that German automaker Volkswagen Group has been manipulating laboratory emissions tests on its diesel cars for years.

Apparently, VW ran software on its cars that sensed when the tests were being made and released urea into the emission gas to neutralize harmful nitrogen oxide emissions and dramatically improve the results.

So successful was the fix that the real results could be ten times worse than the recorded figures. Shares in the firm have collapsed more than 35% since the scandal hit and today CEO Martin Winterkorn resigned.

But collateral damage from news of the VW scandal rolls on daily. Johnson Matthey, a refiner of platinum group metals used in catalytic converters has also seen its share price drop by 11.8% so far. Even though diesel car catalysts account for no more than 15% of Johnson Matthey’s profits.

Likewise, platinum prices have taken a pasting as their use in diesel car catalysts is such a significant part of the demand picture. Platinum fell to a 6-and-a-half year low of $925.30 an ounce this week,, after dropping 4% on Tuesday alone, its biggest one-day fall in more than 2 years.

The metal is already down more than 20% so far this year and speculators digesting the likely impact on demand will not have been encouraged by some reports suggesting this could be the end of diesel cars.

In Europe, diesel car sales make up about 50% of all new registrations so potentially the impact on new car demand and production could be catastrophic. Compared to the US, where only 2-3% of all new cars are diesel according to data in the Financial Times. Improvements in gasoline engine efficiency had already begun to have an impact of demand for diesel cars though as this from pre-scandal days graph shows 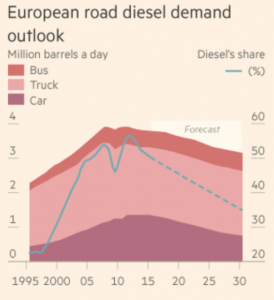 Only in the UK and Italy were diesels holding steady or rising but demand would have been bolstered this year from a dramatic fall in diesel fuel prices relative to gasoline following the commissioning of 2 new refineries in Saudi Arabia which had flooded the European market with cheap diesel. 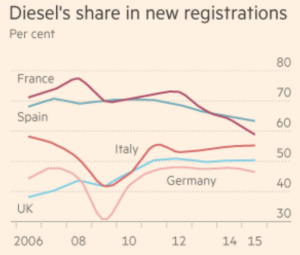 Auto catalysts made up 40% of demand for platinum last year, with jewellery accounting for 35%, according to Thomson Reuters GFMS quoted by the FT. Unfortunately, the hit on demand comes just as demand was rising. Demand for platinum in catalysts rose by 4% last year, the fastest rate of growth since 2011. Palladium, in contrast, fell only 0.8% and may be the major beneficiary of a switch to gasoline engines. Palladium is used to make catalysts for gasoline cars in markets more popular in the USA and China, the world’s 2 largest car markets.

With so much uncertainty surrounding how revised emission tests will categorize diesel and allocate appropriate tax penalties for the real emission figures, no one is going to buy a diesel for some time to come. Not only will this permanently dent platinum demand it will cause immense disruption to diesel engine manufacturing and the industry’s supply chain.