Home | Company News | For Alcoa, Inc., 2 Companies May Be Better Than 1

For Alcoa, Inc., 2 Companies May Be Better Than 1

Is Alcoa, Inc., succumbing to the next investor driven fad or is there sound logic in the aluminum giant’s move to split itself in 2?

It’s a fair question. Alcoa, as a firm, has navigated itself well through a torrid time for the aluminum industry. Sky-high physical delivery premiums, the company is in an industry both saved by and with a market massively distorted by the activity of financial players, a roller coaster primary metal price, unprecedented competition from China and a revolution in technologies such as aerospace and automotive driving robust demand.

It has not been easy and, on the whole, most would agree Alcoa has steered a well-managed course around the rocks. 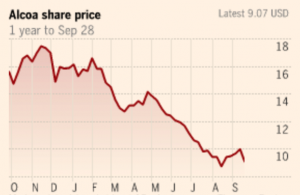 But the shares have taken a battering in spite of many good acquisitions and investment in downstream, value-added activities. The firm has found its legacy smelting business, the company’s vertically integrated structure, to not be the advantage it once was. So, Alcoa has decided to split itself in 2 next year, one half retaining the Alcoa name to include the legacy business of bauxite mining, alumina production and primary aluminum smelting.

According to Reuters, this half of the business would have had revenues of $13.2 billion in the year ended June 30, EBITDA of $2.8 billion with 64 facilities worldwide and around 17,000 workers. The alumina business has been very profitable of late making up for the poor performance of the primary smelting operations that have been devastated by low prices and have seen a third of Alcoa’s capacity closed down since 2009.

What is yet to be named, but is currently termed the “value add” business of downstream processing operations, had revenue of $14.5 billion with EBITDA of $2.2 billion, 43,000 workers and is spread over 157 facilities. Heavily focused on aerospace, automotive and construction products and handling not just aluminum but also titanium following the acquisition of titanium fabricator RTI it is generally seen as the future. Growth is robust and Alcoa is a market leader with a strong brand and great depth of experience.

Done deal then, why wouldn’t the firm hive off the primary business that could be said to be dragging it down and quietly leave that to its cyclical pattern? When the good times are likely to return is questionable with the center of gravity in the industry moving to Asia and the Middle Eastm, but the firm could argue it is better off focusing on the raw material side of the industry.

Splitting these diversified firms into more focused entities is something of a current fad, the WSJ makes examples of Danaher Corp., Hewlett-Packard Co. and Yahoo’s plan to spin off Alibaba Group. Not so long ago everyone was going in the opposite direction saying diversification gave protection against the cyclical nature of markets, increased growth prospects and created a more stable business model, does that mean that focused entities are the opposite of this?

The metals industry is not without examples of firms that have bucked this trend of specialization. Look at Nucor, as an example. Not only is it the largest and most profitable steel company in North America, it is also the most diversified and the firm would argue, as a result, it has an excellent return on capital and one of the highest valuations – the stock trades at nearly 20 times last year’s earnings and has a forward P/E ratio of 13.74%.

Nucor, too, faces intense competition from cheap Asian imports, yet its diversified structure has helped it weather that storm and consistently outperform its rivals. Nucor is involved in steel from raw material supply through to specialist applications such as construction. Alcoa’s downstream value-add does not necessarily need primary metal supply to be in-house.

Novelis operates a first-class North American operation without any primary capacity, but, like Nucor, Novelis does have a dominant position in the scrap recycling industry and, as such, arguably has its metal supply covered. Nor does Alcoa primary need the downstream processing businesses to survive. Only about a third of its smelters’ output is consumed by Alcoa’s own rolling, casting and extrusions mills. It appears to have been company policy to run the 2 sides of the business as independently as possible for many years.

Alcoa CEO/Chairman Klaus Kleinfeld clearly believes the value-add business is where the future lies. He has nailed his colors to the mast by saying he will retain the role of Chairman and CEO of the downstream entity while merely remaining the temporary Chairman of the primary business until a successor is found.

For now, aerospace and automotive are 2 of the fastest growing sectors on the manufacturing landscape, you can see why investors would be excited to focus on the future opportunities such industries hold, but half the business still resides in the primary market. So, whether overall investors see a substantial improvement in the total value of their combined shareholding remains to be seen. And remember, aerospace and automotive have shown themselves to be cyclical in the past too.