Are Investments in Emerging Markets Set For a Rebound?

Many investors are hoping so after funds with a focus on emerging markets have taken a battering this year.

BlackRock’s MSCI emerging market exchange-traded fund, for example, has seen net withdrawals of $7.4 billion this year. Nor are private investors the only ones selling. Central banks and sovereign investors, particularly among oil producers, have been selling foreign assets to raise cash to plug deficits. In mature markets investment managers have a lower weighting in emerging markets than at anytime since 2008, according to the Economist.

As a result, asset prices have fallen, not just on the Shanghai stock market, although falls there have been the most spectacular, but even in London and New York where investors have seen share prices of mining companies collapse in the face of falling commodity prices.

In times of strength, cheap credit has the effect of driving booms by fueling economic activity and pushing up asset prices, but as assets fall banks become less willing to lend and activity declines. That is the position we are in now. Capital flows into emerging markets have stalled according to the Economist’s Buttonwood columnist, so much so that the combination of emerging market governments selling assets and private investors dumping emerging markets and commodity stocks has combined to deliver an end to the post-financial crisis, debt-fueled party.

Searching for the Elusive Bottom

Is it overdone? Has the bottom been reached? Some hedge funds, that shorted the market when they gauged the coming China slowdown correctly (most didn’t but a few did), are said to be sitting on piles of cash waiting for that inflection point.

So far, there is no sign these funds deem it to have been reached. Both shares and commodities are inextricably linked again in today’s market – so much for the counter-cyclical bet commodities were once said to be – and they are both looking like there is more downside than upside, not just this year but next as well.

In the US, corporate debt spreads are rising again after a 3-year fall. Spreads are the difference between the interest rates paid by governments and blue-chip companies and those paid by riskier borrowers and reflect the markets perception of the risk of default. Rising spreads imply that investors are getting anxious about being repaid, and while rising spreads are not a guarantee of recession, they have been a harbinger in the past. 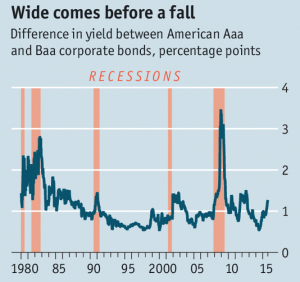 As the Economist points out, default rates on high-yield – the riskiest debt – have not been rising yet, so rising spreads are not translating into higher defaults but this is yet another sign that stresses in the financial markets are rising, undermining the prospects of a healthy rebound.