What the IMF Global Growth Downgrade Means to You

The IMF’s report on the global economy last week was like the Curate’s Egg, good only in parts.

Depending largely on where you live in the world, the fund’s opinion varies on performance this year and next, but broadly the news isn’t great. A deep slowdown in China and other emerging economies is overpowering a strengthening recovery in richer countries, notably the USA, UK and some parts of Europe, the FT reports.

Although advanced economies will post their best performance since 2010 the paper says 2015 will mark the fifth consecutive year that average growth in emerging economies has declined. The IMF predicts in its twice-yearly world economic outlook.

We are accustomed in the metals market to seeing the blame heaped on China for the slowdown, but although the fund does single out China’s rapid transition from an investment-led, export-orientated manufacturing economy to a services-led internal consumption economy as part of the reason for a marked slowdown in the world’s second-largest market, other factors are also singled out.

Economies reliant on the export of commodities and raw materials — such as oil, natural gas and metals or ore — have seen incomes drastically cut and, as a result, have experienced a marked drop in government expenditure.

This has pushed some, such as Russia and Brazil into recession, and severely strained the budgets of many Middle East economies. But the paper also lists other reasons the fund has identified including lower productivity growth, high public and private debt levels, aging populations and a hangover from post-crisis investment booms in many emerging economies. 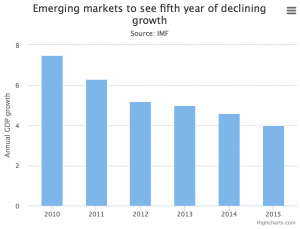 On the plus side the IMF still expects growth of 6.8% this year in China moderating further to 6.3% next year, many believe that is a little optimistic but much will depend on what level of stimulus Beijing decides to implement later this year or early next.

At the very least most are expecting a significant increase in power transmission infrastructure spending, although to what extent that would boost overall GDP remains to be seen. 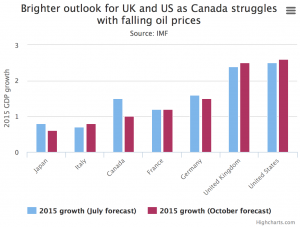 Growth in the US this year was weaker than the fund expected in April, reflecting a bad first quarter, the FT says, but the fund expects growth to pick up from 2.6% this year to 2.8 % in 2016.

What About Europe? India?

Somewhat in reverse, the fund is expecting UK growth of 2.5% this year to ease to 2.2% next year but that would still leave it head and shoulders above Europe as a whole. Within the EU, Germany is still showing weak growth but after years of anxiety the standout performers in Europe appear to be Italy, Spain and Ireland, all of whom have shown stronger than expected growth this year, albeit from a prolonged period of stagnation.

Likewise India, has achieved something close to 7% growth this year and is forecast by the fund to be on track for something similar next, although, as we have written recently, for India to continue at such a pace will take reforms that President Modi’s government has so far failed to deliver.