Part 2: What The IMF Downgrade Means

This is part 2 of a post on what the International Monetary Fund‘s recent global growth forecast means for purchasers in major and developing economies. Here’s part 1 if you missed it

Overall the world economy is now expected to expand by 3.1% in 2015, the London Telegraph reports down from an earlier forecast of 3.3% in July. This represents the slowest expansion since 2009, when global growth ground to a halt.

Growth in 2016 is expected to pick up to 3.6%, itself downgraded from a previous forecast of 3.8% and not much above the 3.1% considered stall speed for the global economy as a whole.

So what are the risks? Well to the pattern of a gradually slowing global economy should be overlaid the risk of an outright recession in South America’s big 5 of Brazil, Chile, Colombia, Mexico and Peru, while Russia’s recession is expected to extend on into 2016 as oil prices are not predicted to average above $55 a barrel through 2017. 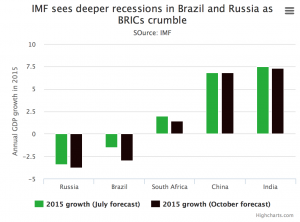 The risk of recession in mature economies is rising, although still believed to be unlikely at the moment.

Although growth is so weak in Europe that inflation is not expected to reach the European Central Banks’s 2% target even by the end of the decade. 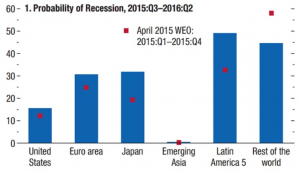 We should be adjusting to the prospects of low growth in GDP, wages and living standards, rather than looking at those conditions as a temporary problem to be fixed. We should be tailoring public policy to achieve steady but more modest growth. In the absence of any major disruption that may be the best that can be achieved.

PREVIOUS POST:
India Exports Welded Stainless Pipes to the US as China Undercuts Prices at Home
NEXT POST:
Zinc and Lead Prices Rise, May Point to Future Advances